Posted on October 31, 2020 Posted By: sherryCategories: Reflections On Our Collection 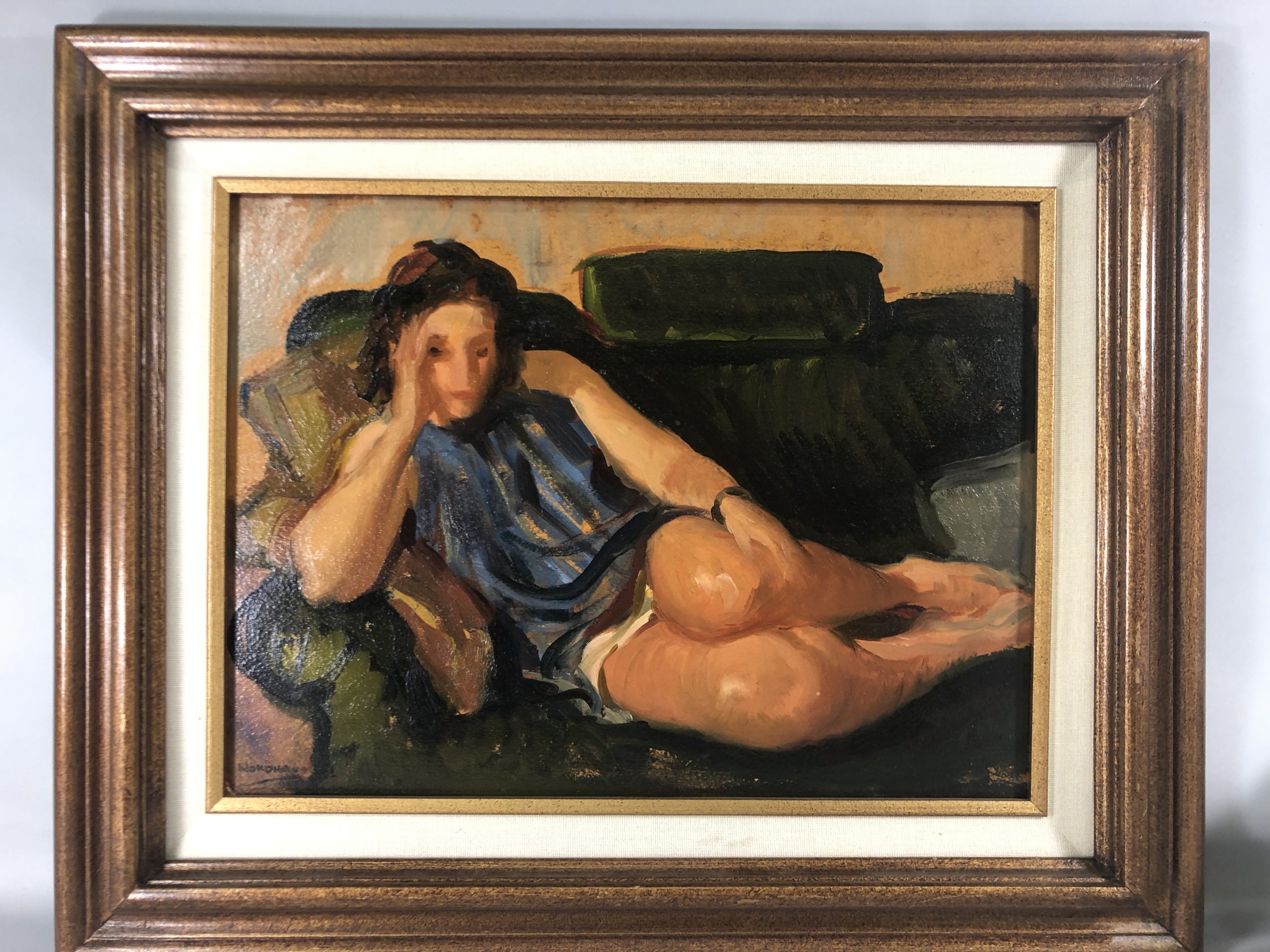 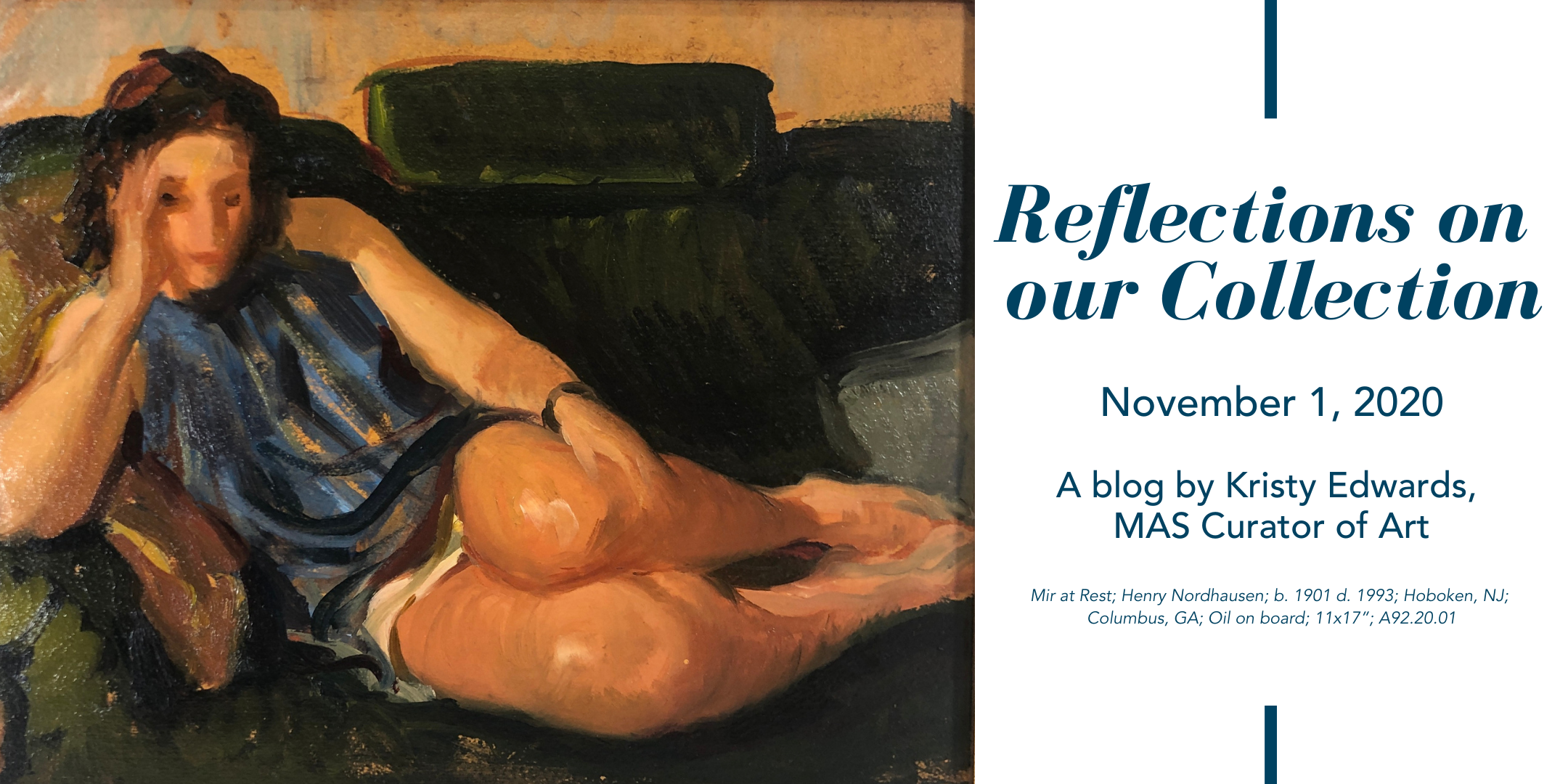 This beautiful work of art, “ Mir at Rest,” was purchased on recommendation from the MAS Fine Arts Committee in 1992 with funds from the Betty Sweet Simmons Endowment. The accession file I have here on my desk lists the artist’s address and telephone number in Columbus, Georgia, a sister city to our west that has been a cultural stronghold for decades. The painting was painted in 1935 and came to us only one year shy of Nordhausen’s death in 1993. Because of the contact info of the artist present in the file, I can assume this was purchased from him directly.

Nordhausen moved to Columbus, Georgia, in 1960, already established and well into mastery of his work. He found Columbus a welcoming place to set up a studio and a life. In Hoboken, New Jersey, he was born in 1901 and attended the New York School of Fine Arts after high school. After that, he went to art school in Germany, the country of his family’s origins. Later, Nordhausen served the country during WWII and returned on a GI Bill, and studied art further at Parsons New School. When he arrived in Columbus, he was well established and prolific-especially with portrait commissions. The Columbus Museum has a prominent collection of his work.

It was exciting for me as a painter to find this among our shelves. His work is the style of work I hold up as a goal to achieve. This fluid but not sloppy brushwork is exactly the relaxed and confident skill I hope to achieve every time I pick up a brush. Impressions of light and texture, fluid lines, expert shadow/value work; color knowledge – they’re all in this little 11×17” painting made when the artist was 34. 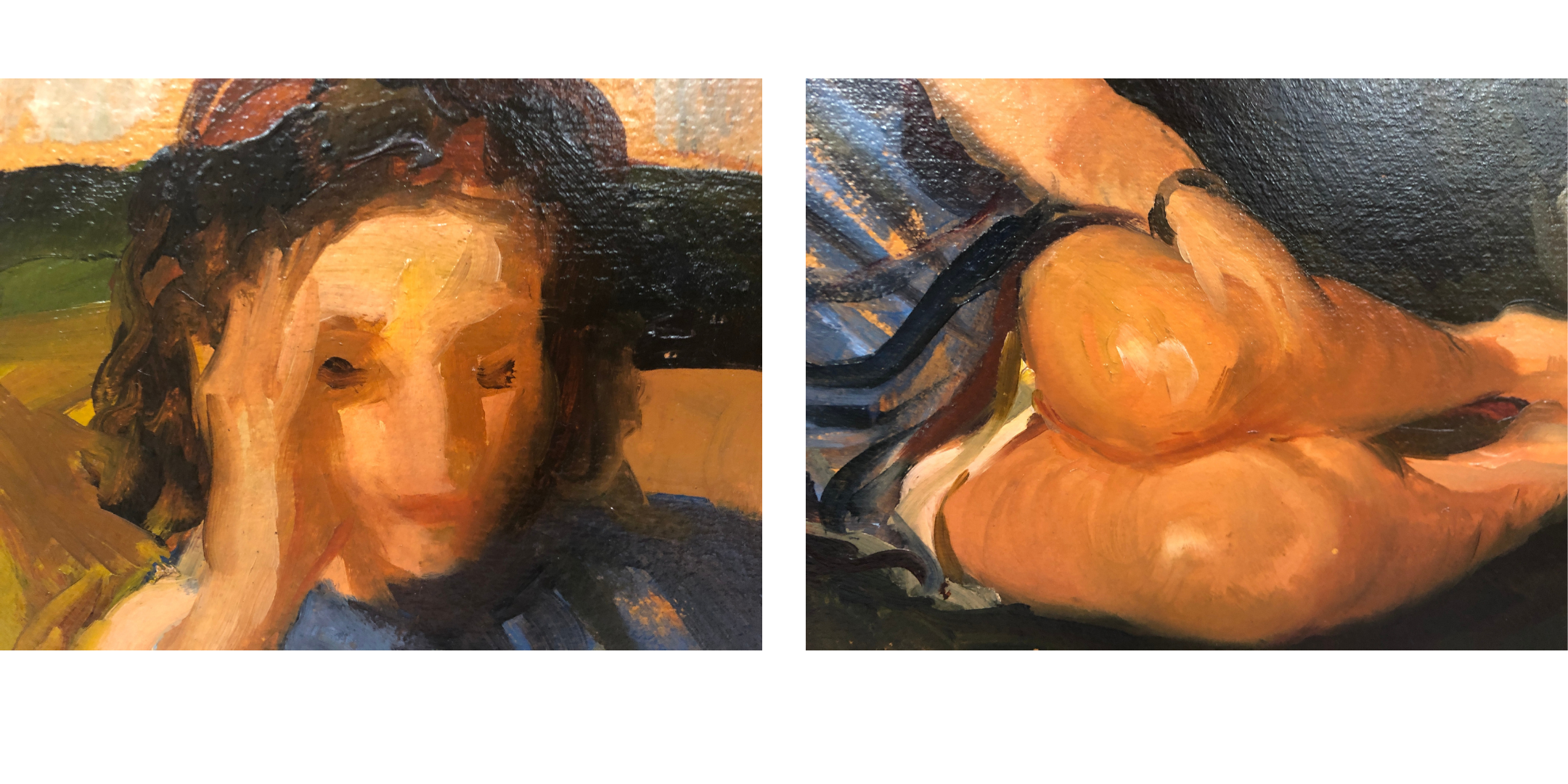 Little is known about our piece, and I will try to interpret it for you based on my experience and knowledge. What I see before my eyes is a painting that is very likely done alla prima( Ita.: all at once), particularly “in one sitting.” This painting type requires a near plein air sensibility-set up, evaluate the scene, get it down, pack up, and leave. Of course, the difference is this is interior, whereas plein air translates to “fresh air” or outdoors.

There is a quick, decisive feeling to this painting. I can feel the artist’s need to get to business because this young one may easily tire and not cooperate with being the model AT ANY TIME. No need to overly express any details- swoop in, dash, dash, dash, swish, scumble, slur, scumble, drag. That’s it. Finis! Maybe you can see how this requires some real deft skill and also a demeanor of not fussing or waste- of either paint or time. Decisive, bold, yet sensitive.

I can see he most likely employed a medium with his paint to make it more fluid. It is very smooth in many areas, although not so smooth as to occlude the brushwork–the brushwork’s bristles and shape, which leave a signature of their own that the artist learns to exploit for his purposes. I see also it is fixed by varnish for protection. I get the sense he had excellent studio practices. As a curator, these indications give me such a sigh of relief, knowing an artist such as he has done a lot to help my job by securing his works of art for perpetuity. Art preservation begins on the artist’s easel. It begins with their choices of long-lasting archival supplies. And this is not always the case and often is not. Such practices indicate a master having studied under other masters and learned the specifics: the importance of a sound and stable ground, non-fugitive pigments, and the proper drying before varnish to avoid cracks.

One of the things I like to do as a curator here at MAS is connecting the dots between and among artists. I am happy to be able to do that here! I have enjoyed being the student and friend of Bo Bartlett, who is from Columbus. Many of my artist friends live in Columbus. I remembered that Bo had told of his time with Nordhausen, who invited him when he was young to his studio- not expressly as his student, but informally to be around him and learn. And learn Bo did. He was drawn to Nordhausen’s atelier and spent much time there watching and listening. 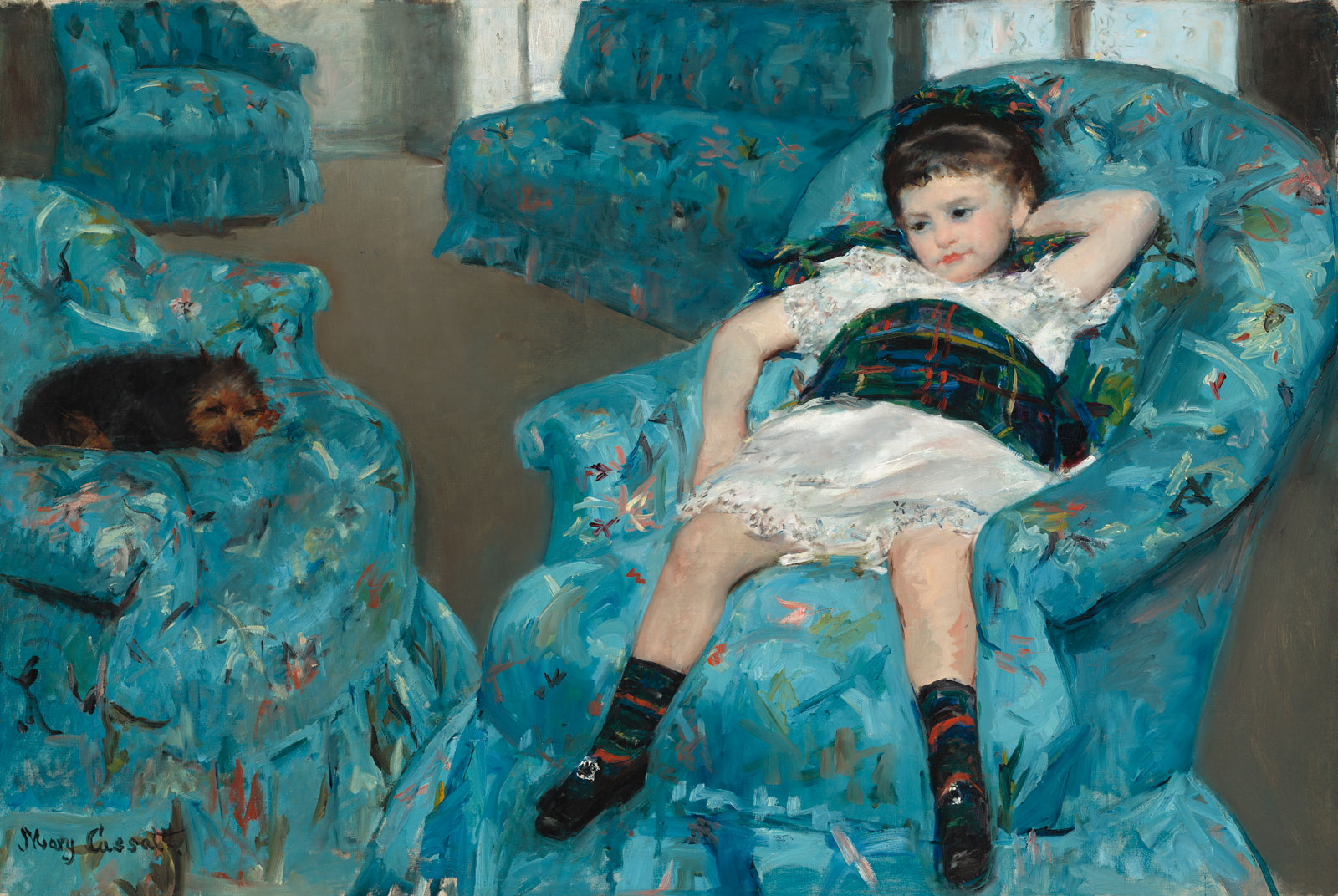 Here is a Mary Cassatt (American, 1844-1926), which comes straight to my mind when I see Nordhausen’s Mir at Rest. Maybe this is a stretch to compare, but the essence of the paintings is similar to me. The child made model. The home sofa or chair. The obvious boredom befalling them both. The loose but structured work. There is a tension that exists in a great painting; in my opinion, it is the tension between“loose” brushwork and “structured” framework. The establishment of an armature (skeleton) must be present to support the brushwork that comes afterward.

Enjoy your Sunday afternoon and think about art, support it, and make it.