Posted on March 22, 2021 Posted By: Kyrie HugdahlCategories: Reflections On Our Collection 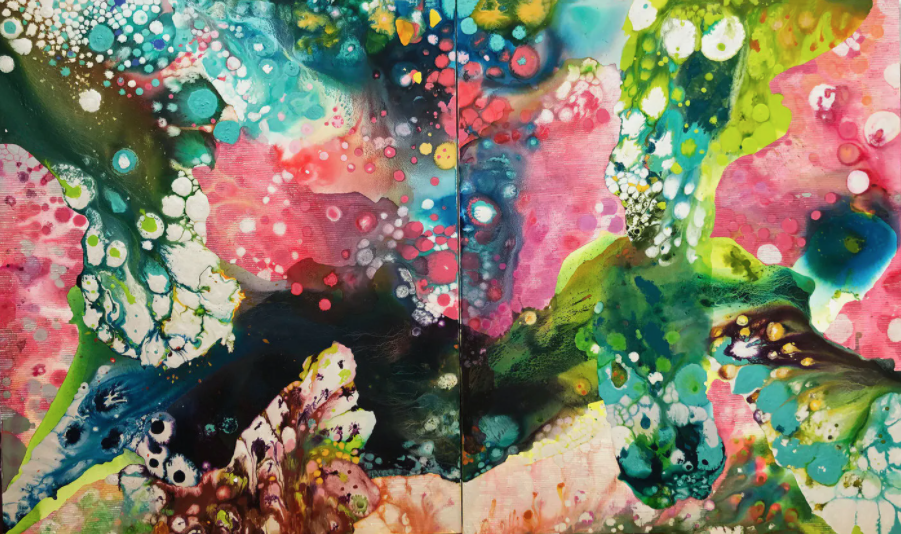 Though paintings hang all day long at galleries and museums all alone on the wall, with no one to explain them, and they do just fine all by themselves telling the viewer whatever it wants or the viewer projecting what they want, I still believe art is so much more deeply understood when something of the artist’s technique and ideology is known and can be added to the interpretation. This understanding is often offered by someone like a curator or an art historian. I find that this belief holds true with the work of Whitney Wood Bailey hanging in the Burgess Gallery until May 29th as a part of the annual Emerging Artists IX show.

Even without a word from my mouth, Bailey’s paintings speak through her voice, and the paintings by their own voice. The size helps them have a BIG voice; the intricacies and the sheer number of marks pump up the volume. One cannot walk into the gallery of 7 paintings (all 5-7’ in dimension) and not hear them. Somehow, Bailey has managed to envelop you in them, which is due to the way that MAS Executive Director, Susan Welsh, curated the walls with them. They are alike enough to feel cohesive, yet each one is totally unique from the others. The room of her paintings becomes an installation of sorts, meaning that you experience them instead of merely seeing them; you actually feel them. They envelop you creating an 'otherworld’ feeling. Yet that ‘otherworld’ is obviously familiar- either as a Hubble-esque image of space, deep ocean, or landforms. You do not feel separate from them or that they are all that foreign. Her work hits a deep note in its viewer; a note of resonance. 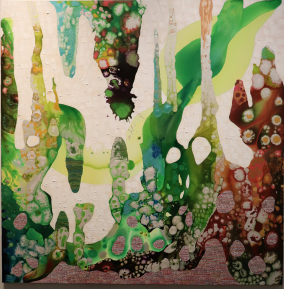 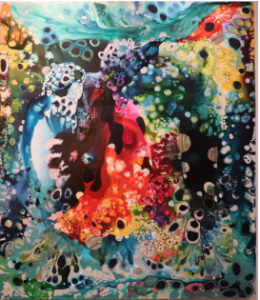 I had the pleasure of speaking with Whitney regarding her process, her thoughts, and philosophy on our Instagram TV. Her artist statement is available to be read here or listened to read by me here on our Instagram. She is definitely driven as one can see by the sheer complexity of work, the numbers of them, and sizes of them. 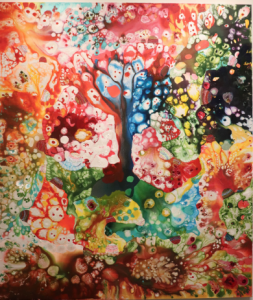 "Ticking" strokes in the "Tree of Life".

Whitney developed her own technique; she discovered it by accident when a carbonated diet drink spilled on a piece of Arches Cotton Watercolor Paper, soaking and drying into a pattern so beautiful she stopped in her tracks when she found it. Being conscious enough to pick that accident up and develop it into a working technique is how we have the work we see now at MAS. Another interesting facet of Bailey’s technique is the intentional brushwork of her “ticking,” as she refers to it; a small flat brush triple loaded (three colors on it at once) is used to lay strokes over the dried abstracted surface. In some paintings, they are in shapes, and others as a whole mesh-like surface, creating a gauze we must look through. This ”ticking" was something inspired by her visit to the early cave paintings in France, where she saw the evidence of this type of patterning. The cave paintings are some of the earliest markings of art made by humans. 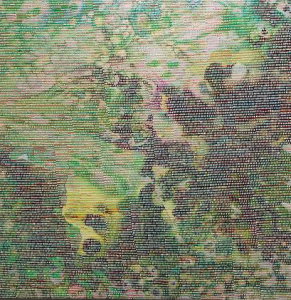 The paintings are a combination- an interplay- between organic happenings as byproducts of the laws of physics (i.e., drips and runs) that the mediums of acrylic perform and her detail-oriented trained eye. With watchful intelligence, she steps in to guide the chaotic creations that are amorphic and alive on the canvas. Once she is satisfied by what she sees and the process is dry, she comes back with another layer of work; intentional strokes guided by her intelligence and sensibility. That intelligence and sensibility are unique to her yet very familiar to all of us outside of her, which is exactly why the work is so successful. We recognize the finished product as something akin to the great formations of space, ocean, and mountains. I even saw a resemblance between sections of Joy Fields and the Mandelbrot Set, which is a mathematical equation that makes a visual and can be seen here on this video. There is an elegance in creation that is somewhat accidental and somewhat planned. Bailey’s paintings are this way as well.

A deeply faithful and prayerful person, Bailey integrates her faith, letting go and trusting what happens with her artistic reason, using her logic and her skill to step in and control and interact with that trusted happenstance and accidental swirls and drips and puddles. While one often hears that "there are no accidents,” it is true that there are uncontrolled aspects to both life and Bailey’s paintings. By weaving in these occurrences intelligently into the whole of the finished product, she creates on a small scale what Divine Intelligence creates on an immeasurable scale.

Aside from all of this, the works by themselves are whole works worthy of the same wonder that a great sunset or mountain range elicits. By tapping into that wonder, Bailey gives us the unspeakable, ineffable beauty that exists all around us in nature.

She and I have come together in a shared belief, through her suffering with Mast Cell Disease and with the care of my handicapped son, who was born with a genetic bone disease, we both agree that the making of art can alleviate suffering. Its medicine soothes, its neural grooves form places of mediation in the brain. Making art is good for what ‘ails ya’ as we say here in the south. It not only helps the human who makes the art, but the art they make helps what ‘ails’ our whole world.

Come see the wonderful works of Whitney Wood Bailey in the Emerging National IX Exhibition in the Burgess Gallery.
All works are available for purchase; information is available upon request.