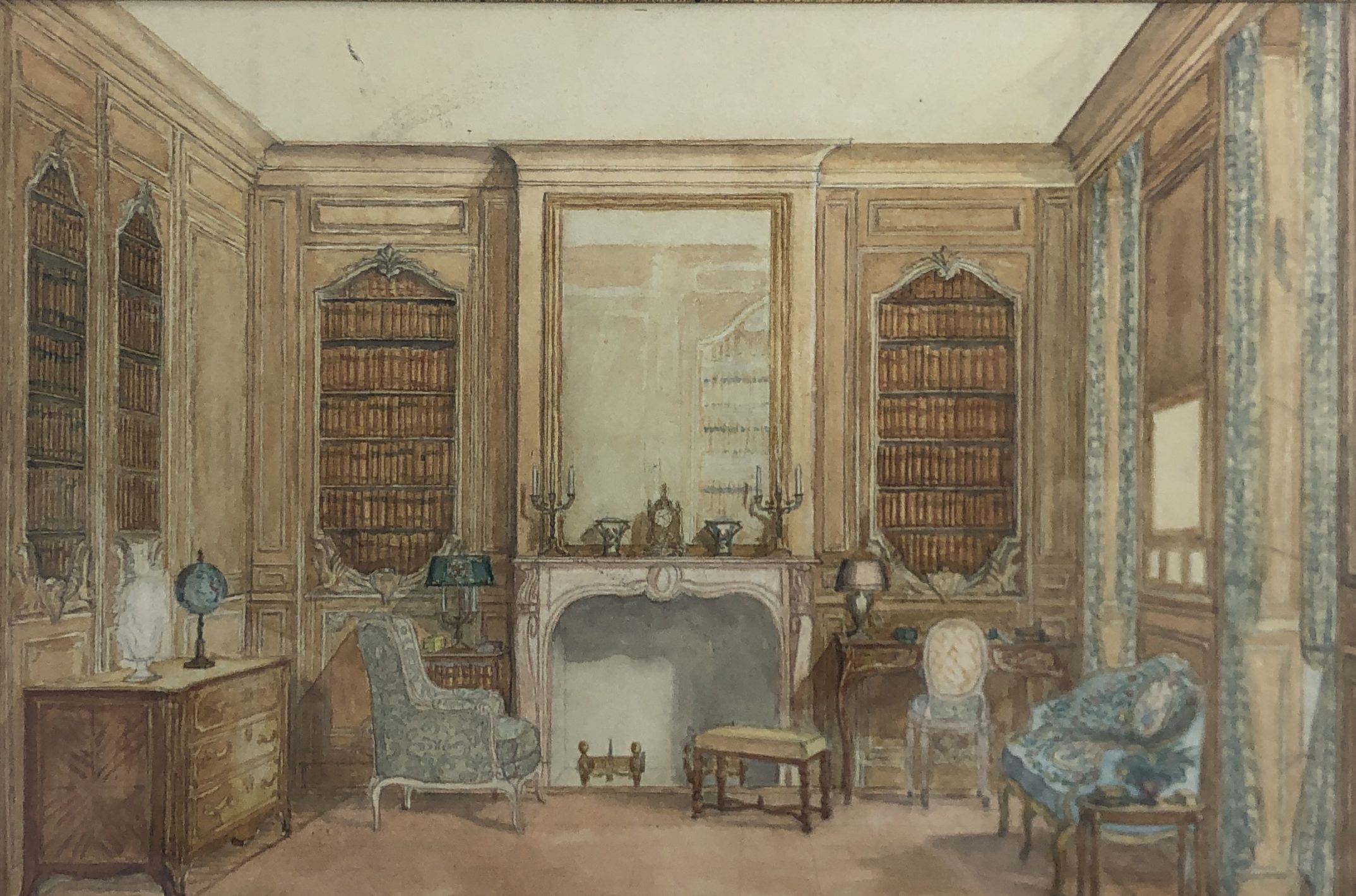 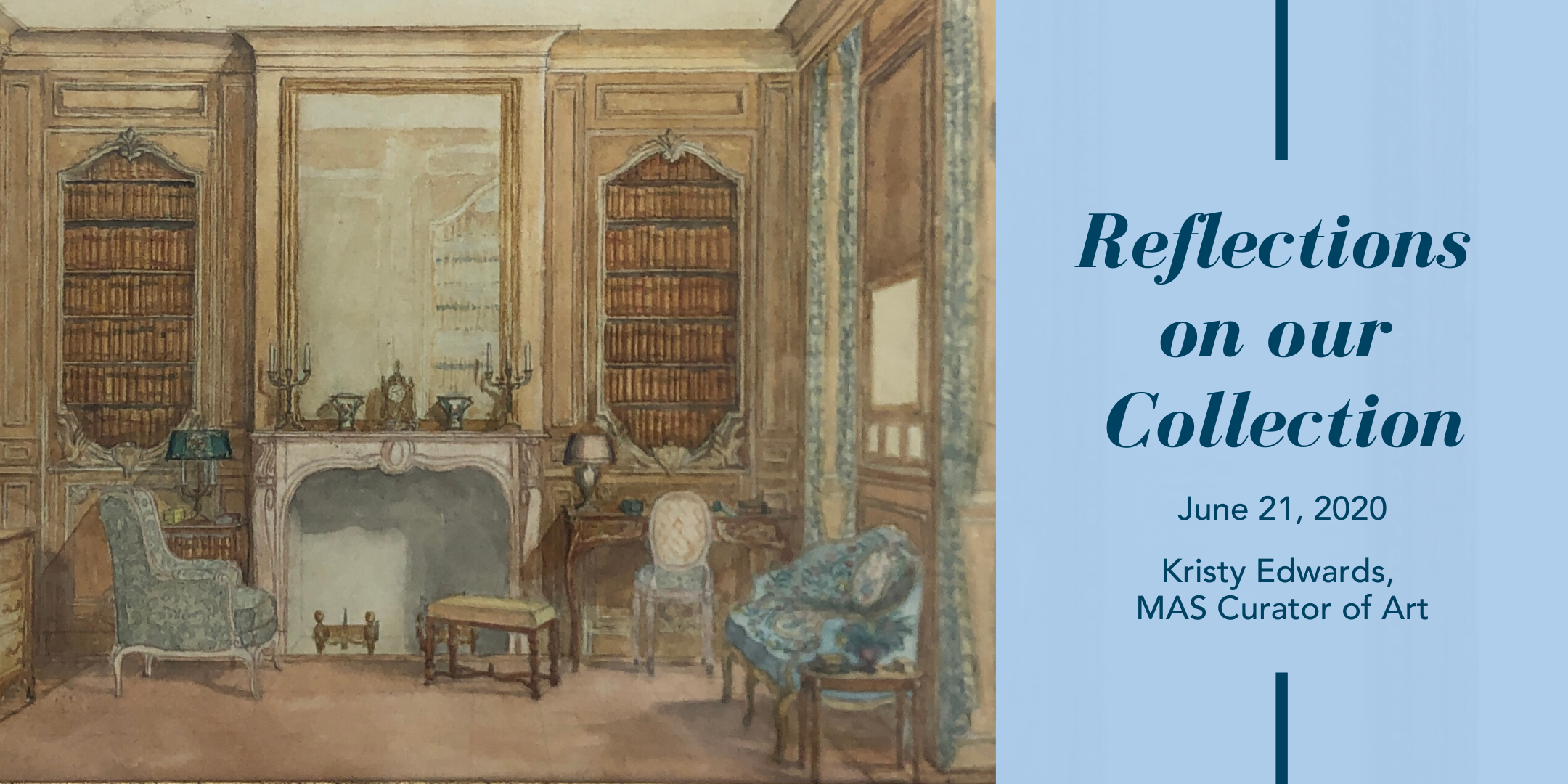 As I was perusing the collection for this week’s blog entry, I saw so many options. It was this very subtle and beautiful watercolor painting which curled its finger towards me and said, “Here”.

Upon inspection, I saw the hand of a very skilled watercolorist who had an affinity for interiors. It is a popular genre for watercolor painting, the medium of choice for so many designers of interiors and of fashion design.

This painting denotes patience and skill. It denotes the type of seeing an artist does- noting light falling across the room, over the arms of chairs, hitting marquetry on the drawers of the chest. Ormolu is highlighted while the tole shade of the bouillotte lamp sits back in the shadow cast from the French marble mantle. The pleasing center vanishing point with its one point perspective - equal floor space in relation to ceiling- and equal side walls leading the eye inward to the fireplace add a sense of satisfaction in composition. That there are balanced book shelves on either side with books neatly tightly fit on them adds to the quiet and calm befitting of a fine library.

Our piece is beautifully framed in a linen mat with a gilt liner in a traditional and appropriate beaded gold leaf frame with bits of red - reminiscent of the under layer called boule - exposed to the eye. “Classic French Library” was painted by Macon native Martina Burke, born in 1918. It was gifted to us in 1997 by Dr. Jasper T. Hogan who was her physician and friend throughout her and her sister, Mae’s, life until in 1964 when she died from cancer .(Mae died the following year.) Martina Burke painted this work while studying interior decoration in New York. In our files, I see a note that says that the artist was connected to Andrew Lyndon, another Macon native and of whose entire fine art collection we were the grateful recipients. In my scant notes on this piece, scrawled in Dr. Hogan’s calligraphic handwriting is an anecdote that little Andrew Lyndon “proposed to Miss Burke at the age of 5”. Miss Burke was quite attractive and something of 20 years his senior. Even as a small boy, he had good taste, evidently. It’s very interesting that the Burke sisters were good friends of architect Neel Reid and Martina was often his preferred dancing partner at events.

Martina and her sister, Mary, called “Mae”, resided in the family home on Georgia Avenue here in Macon. Their grandfather was an Irish immigrant and decorative artist who came to Georgia to adorn the interiors of the Johnston-Hay House here in Macon which is full of fine faux marbre, faux boiserie, and other trompe l’oeil* finishes. He stayed on in Middle Georgia and began a flourishing paint store which metamorphosed into a hardware store and was very successful in the Reconstruction Period of post civil ward Georgia and across the turn of the century. Macon was flourishing at the time.

This family wealth allowed Martina to travel and move in East Coast society spending summers in Newport, RI and other areas where the wealthy gathered. Her time in New York is undocumented by me, but it was something that Maconites did with regularity during her time- go to New York to steep in culture or to study one’s career choice- sometimes coming back home with the new view point and panache and sometimes, as in Lyndon’s case, staying on for the freedom the BIG CITY allows.

Miss Martina Burke and her sister left their wealth to foundations that support the Catholic Church and the needs of those suffering cancer. Dr. Jasper Hogan knew that this piece belonged to us here at MAS because it belongs to Macon. And one of our pleasures and responsibilities here is to hold our stories as best as we are able. Thank you so much to William Slocumb and Jim Barfield for helping me fill in the blanks on Miss Burke.

To further this piece and its legitimacy for you, please look at the work of famed Briton, Cecil Beaton(1904-80) , the current work of New York artist , Mita Corsini Bland, and the delightful paintings of the late decorator, Mark Hampton, also of New York. 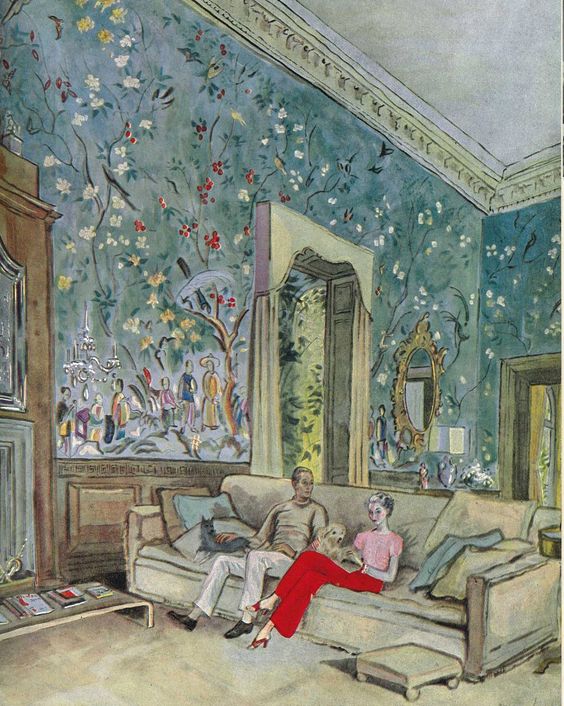 First, we see right away, that Beaton has included figures in his interior which are not present in the “Classic French Library”. We see in contrast to the Burke piece, that his work is less structured and finished. Not as “tight” as we say in the analyzation of art styles. HIs brushwork and the following works all share a looser feel. We see it is also more colorful and charming. Those are the immediate contrasts.

As far as comparisons, they both are painted in watercolor on paper. The time period over laps a bit as well. Also, the room is a library/drawing room. 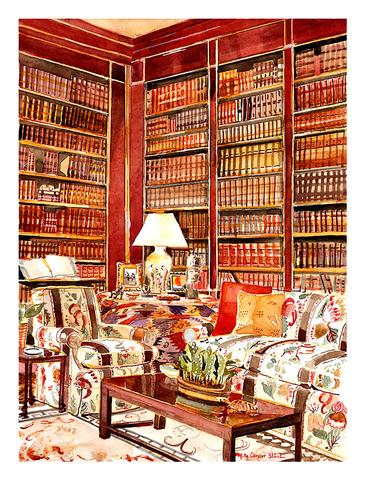 In the Bland piece here, the contrasts are similar to the Beaton painting , her work being slightly more charming and loose of stroke. Like the Burke piece, there are no figures in the rooms she paints. Also of note, Mita Bland often highlights the fabrics and papers of the French fabric house, Brunschwig et Fils. Her dates are later than Burke or Beaton, but she is painting in the same genre, Interiors, as Martina Burke. The tradition goes on to this day. 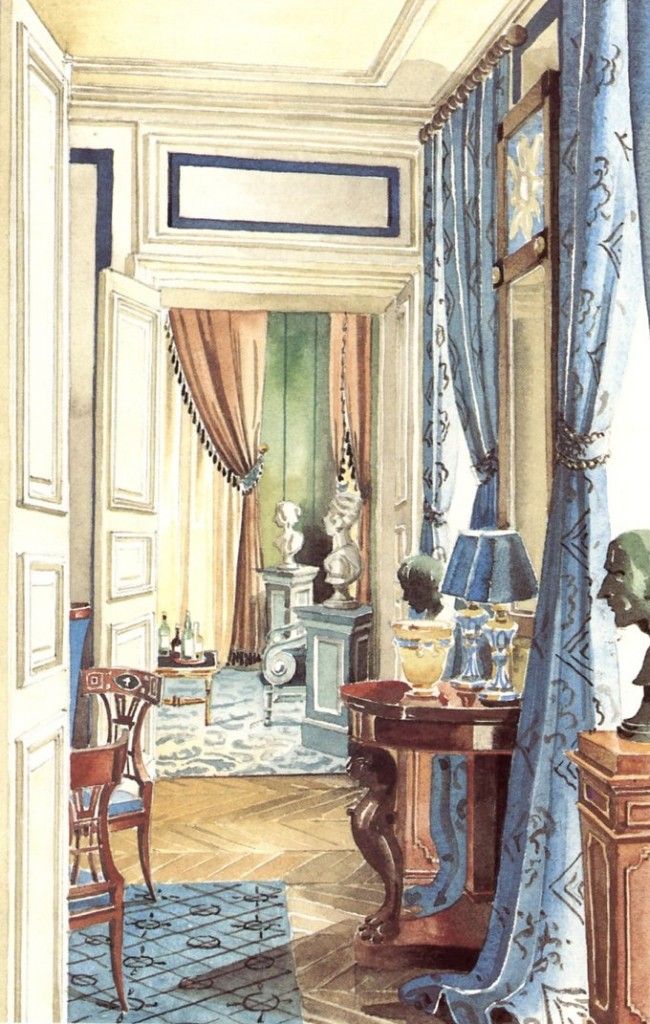 This third example is a painting by the late New York decorator, Mark Hampton, who painted many wonderful and charming interiors. His paintings of enfilade- the term used to describe the delight of looking from one room into another or several other rooms, are very well done. I have his book produced in the 1980’s I often look through to stay inspired. We see in comparison that the interior color scheme is very similar to the Burke piece. The contrasts are alike the ones mentioned above. The similarities are obvious.

None of my examples matched her composition and balance and strict attention to straight lines and formality. Her work stands alone among the comparisons for those attributes. Whether we realize it or not, good design and architecture are noticed by the mind, reflected in the spirit and lived out by the body.

It’s a lovely thing to see, a quiet, well designed classic interior. In it are no messes, no fingerprints, dog hair, glasses or dishes. If life were only so simple and refined as this painting shows. Actually the painting does show that there are places and times where our interiors are picture perfect.

Here- my writing is a tribute to all the area interior designers- so many talented ones in Macon and in a long tradition. I remember well Mrs. Margaret Robinson who often took clients to New York to buy. I can often spot her clients when I am in their homes by her distinctive choices. It should be mentioned that Dr. Hogan’s wife, Jean, partnered with the late Mary Sheridan, and were two of Macon’s most successful pair and operated the beautiful shop “Valentino’s” for many years. Decorators are artists who paint with fabrics, colors, furniture and art going hand in hand with fine architecture. I found a small poem that denotes the vibe of this little painting to me. I’ve read it many times and it is a bit enigmatic as poems can be but it concentrates on that word CALM and so I include it here for you in closing.

The House Was Quiet and The World Was Calm

The house was quiet and the world was calm.
The reader became the book; and summer night

Was like the conscious being of the book.
The house was quiet and the world was calm.

The words were spoken as if there was no book,
Except that the reader leaned above the page,

Wanted to lean, wanted much most to be
The scholar to whom his book is true, to whom

The summer night is like a perfection of thought.
The house was quiet because it had to be.

And the world was calm. The truth in a calm world,
In which there is no other meaning, itself

Is calm, itself is summer and night, itself
Is the reader leaning late and reading there.

* Trompe l’oeil: to fool the eye

Follow the link in our bio and go to "Blog." #MASm