Posted on July 26, 2020 Posted By: sherryCategories: Reflections On Our Collection 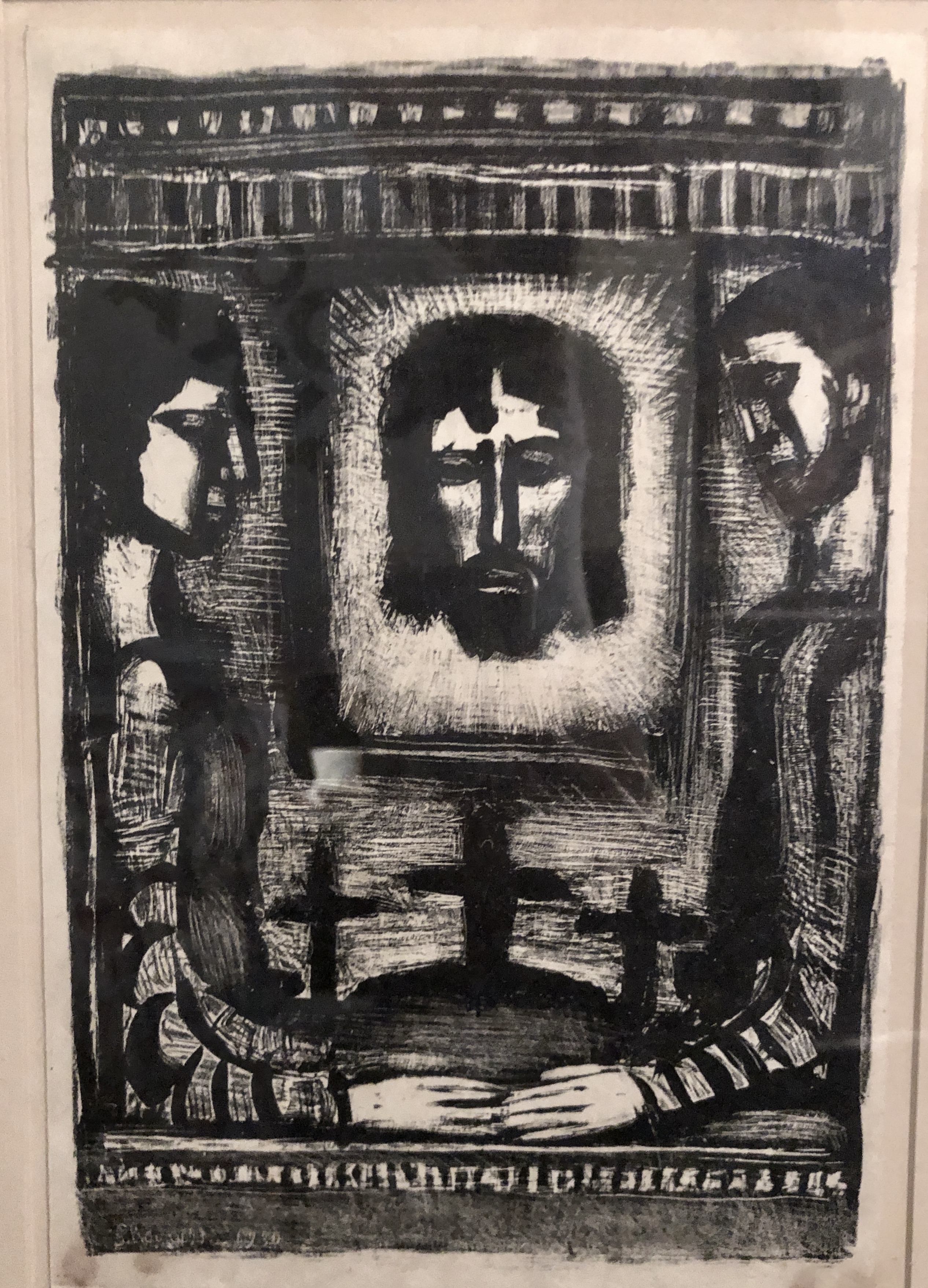 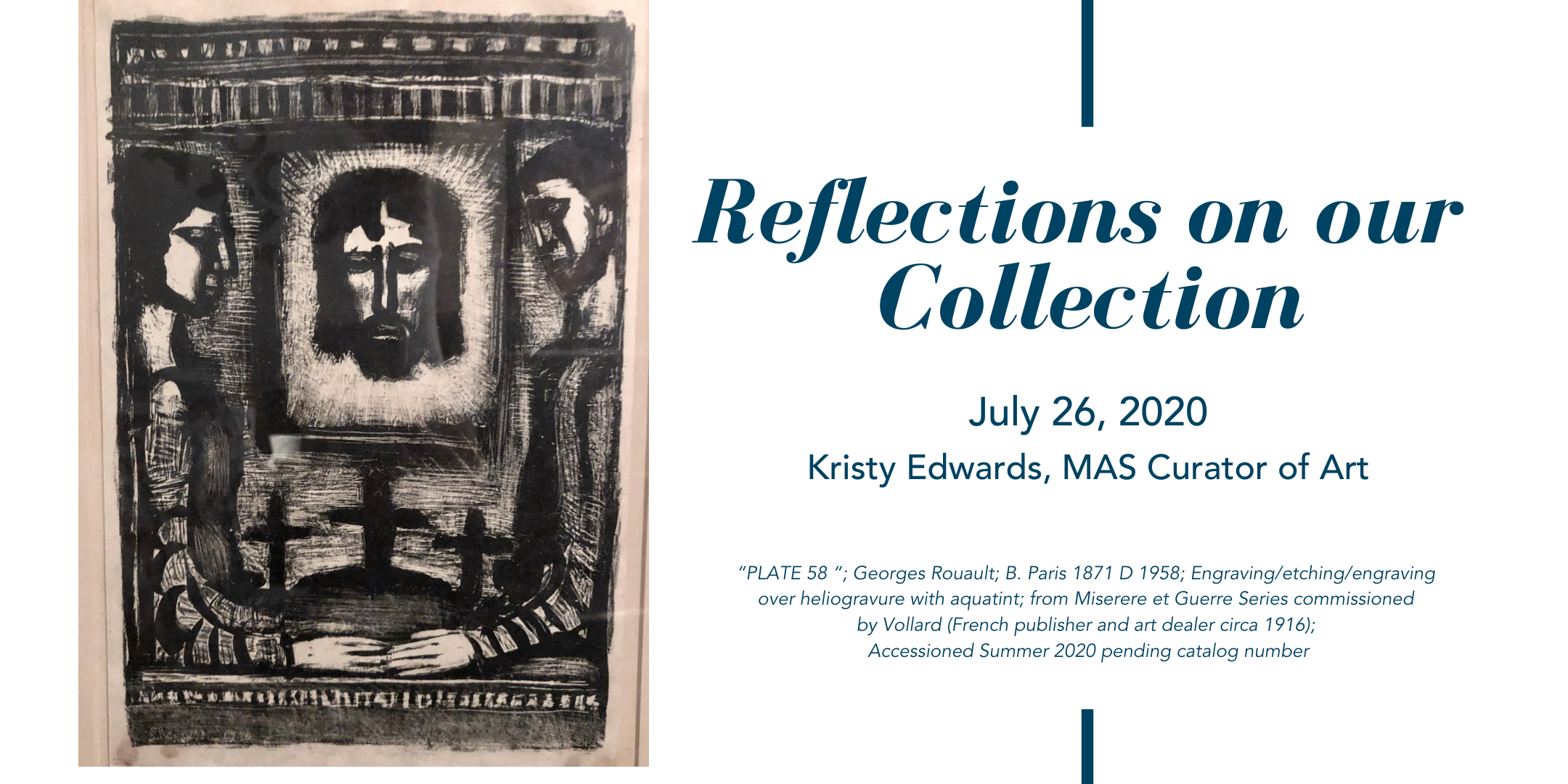 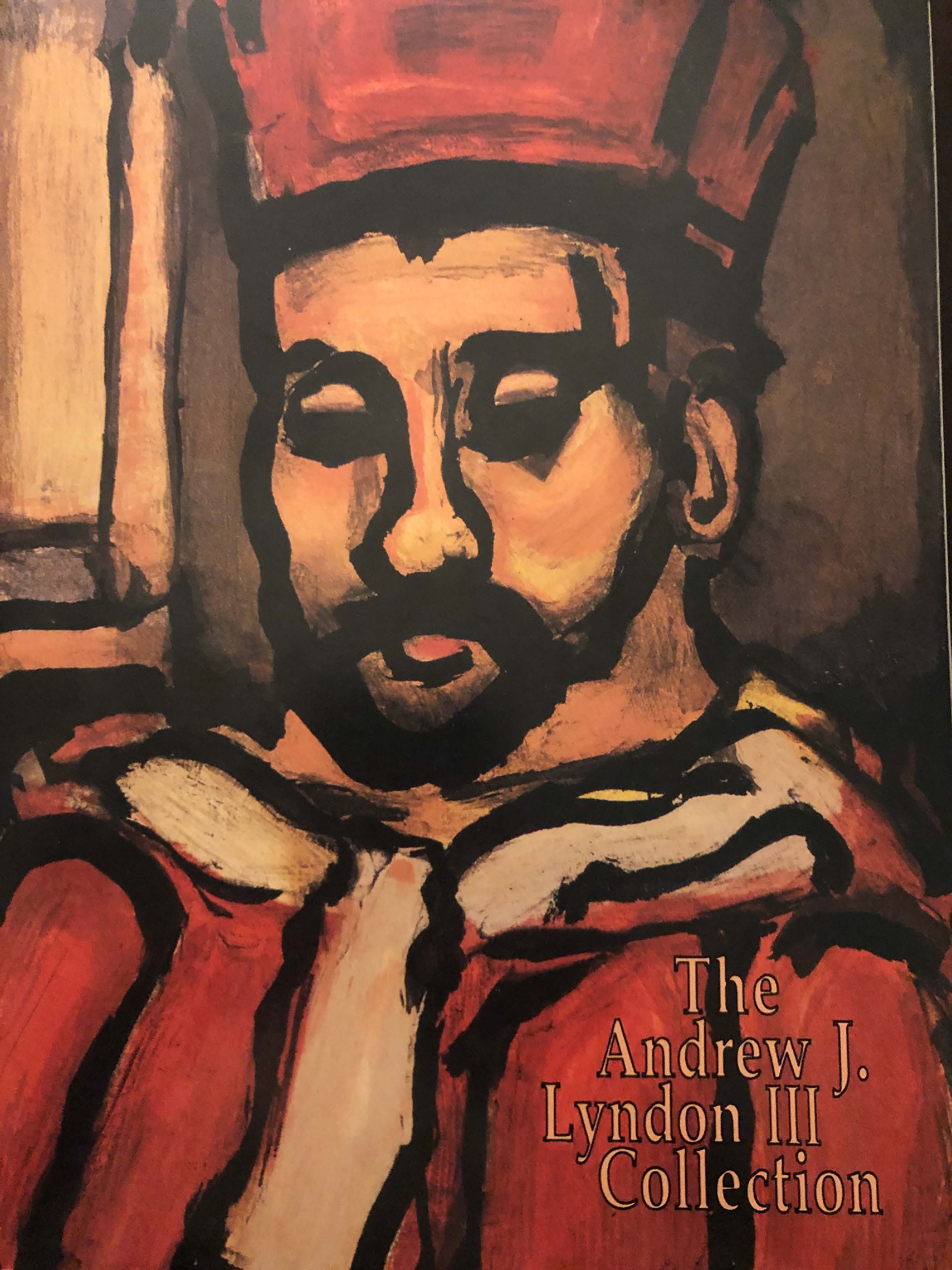 My selection this week is a brand new acquisition. We received this only in May of this year and accessioned it into our collection at the June Board of Directors meeting. We are excited to have it as it matches another Rouault in our permanent collection- “The Judge,” which was given to us in the Andrew Lyndon collection. I include a photograph of that piece here so you can see the signature line and mark making of Rouault. It served nicely as the cover of our catalog when we showed the Lyndon Collection 27 years ago.

Georges Rouault was born in Paris, France, on May 27, 1871. His birthday landed on day two of a week-long massacre by French and Prussian troops against the French Commune, killing tens of thousands of people, many of whom were women and children. Each day of the bloody week of death and decimation bears a different title. His birthday was called “The French Horror.” The day before was called “ The Paris Agony” and the day after called “ The Paris Carnage” to give you an idea. Such was the atmosphere that infant Georges began his existence, an entrance into the lifelong experience of horror and cruelty possible by humankind. He spent his whole life transmuting suffering- through the alchemy of art, he transcended and healed many of life’s wounds on our behalf.

Rouault studied carefully under French artist Gustave Moreau. He studied as a stained glass artist also as is evident in his heavy black lines he favored. He employed a very intensive and unique engraving process to render unique values and tones, especially blacks. He employed heliogravure, which used photographic images under his layered process. He did not particularly join any movement or artistic groups. Still, the German Expressionists were influenced by him, and he is sometimes included as a Fauve (identified by the expressive use of color).

This piece we have in our permanent collection, which I call Plate 58 because I can’t find its proper name, is from a series which includes 58 prints bifurcated in the Miserere (pronounced “miz er reh reh”) group and the Guerre (pronounced “gare”) Group. Miserere in Latin means “ have mercy on us,” and Guerre means “war” in French. The series interweaves the suffering of humanity from WWI leading into WWII. Rouault shows the malice, arrogance, oppression, illness, and poverty interwoven with Christ’s mercy. The series ends (Stephanie Gerring Art and Christianity 2017) with the ultimate mercy of Christ overcoming all sufferings; the ultimate victory.

Please take a look at this uploaded microfiche of MoMA’s book titled “The Prints of Georges Roualt” to see his work, although these are not the series we are discussing. There is some useful biographical information available in this publication, and I found it useful in researching this acquisition for the MAS when our piece was accessioned recently. Some of the Miserere and Guerre prints are available for view here via the Davidson Galleries. Please note that shown in the Davidson Galleries link is a plate 58 which does not match ours- however, if ours is not 58- the end of the series- it is close. Perhaps it is Plate 56 or 57.

Though it has been difficult for me to find the exact name or number of our particular piece], the iconography of it suggests that this print is towards, if not, the final plate of 58 as it shows the Christ above (indicating resurrection), the three crosses at Golgotha and the two criminals aside him. It shows the ultimate victory over death. Since the series ends at the event of crucifixion, it is likely the last plate. If not the last, close to it-maybe 56 or 57. From my research online, it is apparent that this could well be the frontispiece of a beautifully crafted catalog called “Carnets de Gilbert,” a French publication printed in 1938 with 216 total copies printed. In this portfolio book, eight engravings are enclosed covered by tissue. 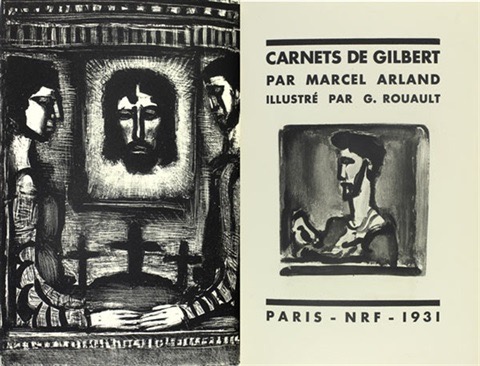 I might add that the subject matter also joins with our current collection of religious-themed art from all over the world spanning most of the major religions as well as speaks to our holdings of Christian art pieces. Therefore this piece supports our existing collection in many strong ways. If you are a devout Christian, this piece of art will likely stop you in your tracks and take your breath. It is laden with deep emotion. If you are not a Christian, you still may find it very interesting and attractive as it denotes a quality of the era, in Europe, the German Expressionist such as Käthe Kollwitz used a line very like Rouault to describe the horrors of world war.

Rouault became a devout Catholic after an emotional, stressful breakdown. It is helpful to know this for me because I think his suffering comes through on a personal level. The plates of this series are somewhat like Stations of the Cross in that they are vignettes of Christ’s overcoming humanity’s sins. In addition to the Christian emotional and spiritual elements, his work is historical and poetic. Just as authors wrote on man’s inhumanity to man, Rouault described this theme through art. Rouault did not have an easy life, but his art mitigated his suffering a good bit.

Not all art is bright and ballerina happy. There are pieces across the spectrum of the human experience right here in our collection. This week, I’d like to share a poem to go with this work by Victor Hugo, which describes the setting of 19th century Paris and France so well. Paris was a city of barricades off and on throughout the strife of revolution and insurgencies of the 19th century. The poem is shown below first in French, as it was first created, then again in English translation. The term “L’Année terrible” was coined to describe this period of death and destruction; such was the era that birthed our Georges.

The poem, Sur une barricade, appears in the collection L’Année Terrible (1872), in which Victor Hugo recounted both personal and national tragedies. He wrote about the disastrous Franco-Prussian War (1870-71), the subsequent Paris Commune (1871), and the death of his son Charles. Sur une barricade focuses on the Commune, a radical insurrection against the government that resulted in much bloodshed. Hugo was dismayed at the wrongdoings of both the Communards and the government, writing in a diary entry, “this Commune is as idiotic as the National Assembly is ferocious. From both sides, folly.” In this poem, he tells the story of a young boy who is embroiled in the violence.

On a Barricade
On a barricade, amidst the cobbles
Dirtied with guilty blood and cleaned with pure blood,
A boy of twelve was taken alongside the men,
“Do you belong to them?” The child said, “I do.”
“That’s good,” said the officer, “we are going to shoot you.
Wait your turn.” The child saw bright flashes,
And all his partners die against the wall.
He said to the officer, “May I go
Return this watch to my mother at home?”
“You want to escape.” “I am going to return.” “These ruffians
Are afraid! Where do you live?” “There, by the fountain
And I am going to come back, Mr. Captain.”
“Beat it, scoundrel!” The child leaves. Clumsy trick!
And the soldiers laugh with their officer,
And to this laughter the dying add their moans;
But the laughter stops, because suddenly the pale child,
Without warning reappeared, proud like Viala,
Came to stand against the wall and said to them: here I am.
Stupid death was ashamed, and the officer pardoned the boy.
[…]

I am no expert in French history. It is my wish to share with you a context for art and artists by placing them in their historical era and also tying available works in music and/or poetry that befits the art. My teacher Marc Chatov was fond of saying, “the muses dance together." Enjoy your afternoon. We are lucky to live in the amount of civility and safety, even in our times. It benefits us to look at how bad things used to get and be committed to not letting these horrors happen.

Get to know MAS Curator of Art, Kristy Edwards. {L

Bring your blankets and chairs and join us for an