Posted on July 12, 2020 Posted By: sherryCategories: Reflections On Our Collection 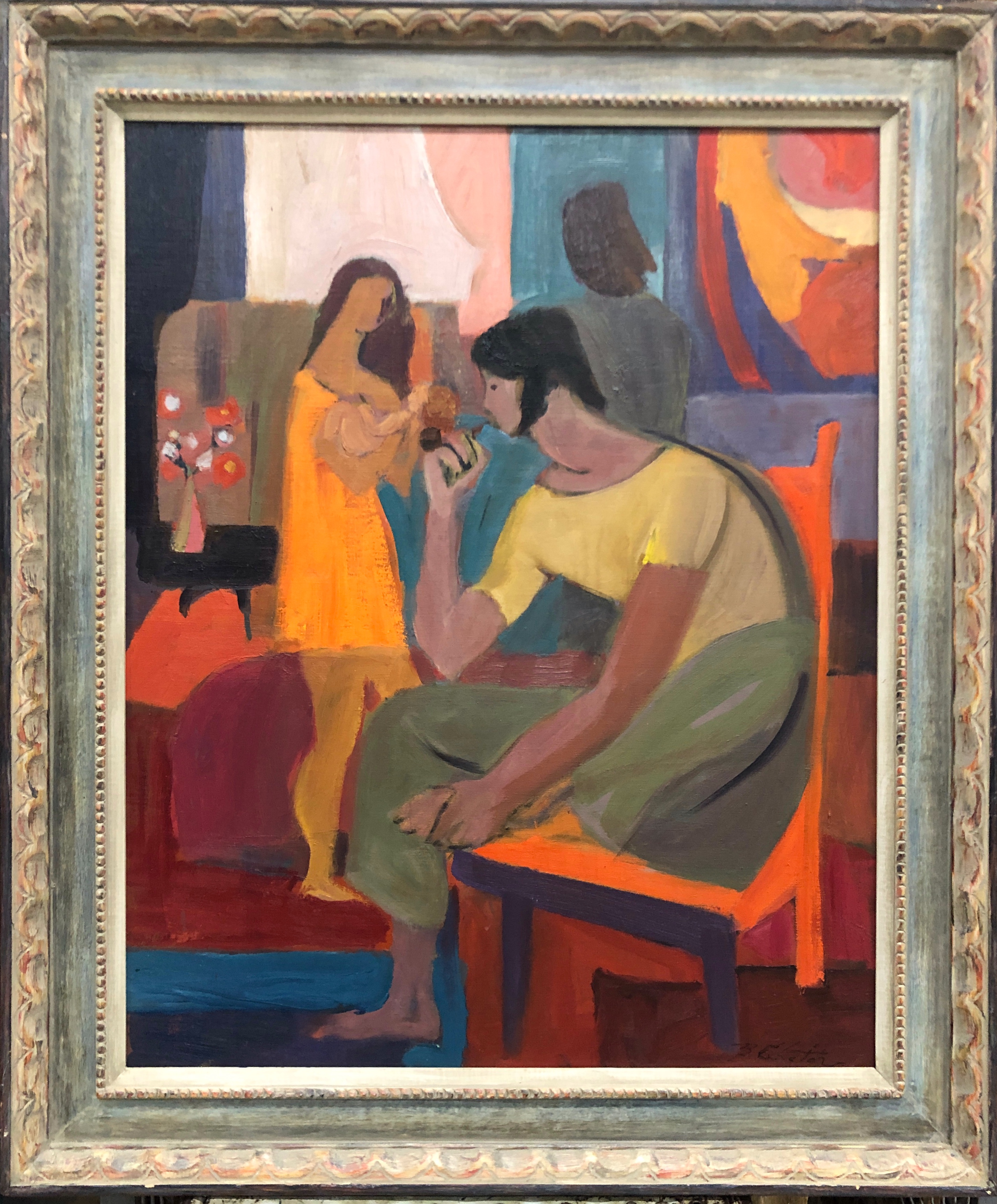 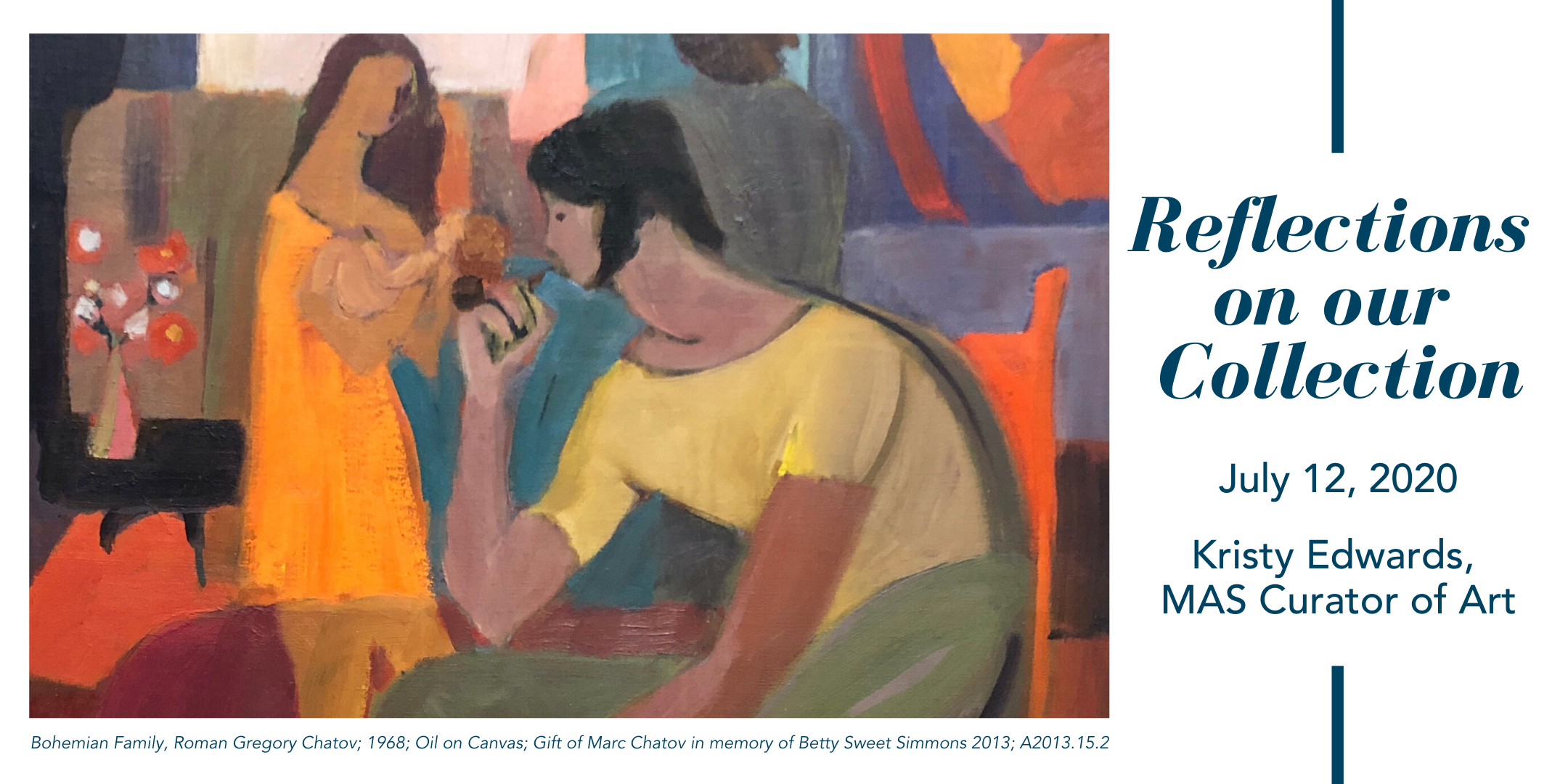 This painting is “ Bohemian Family,” painted by Russian born artist, Roman Chatov, in 1968. While Roman’s work lands mostly in realism and representation, he paints from his sensibilities and style and is leaning into modernism. He treats space here shallowly, even though it depicts a room of some depth. There is a window with a side-swept curtain. There is art on the walls and flowers arranged on modern furniture. A bohemian is one who chooses a different freer type of lifestyle than a conventional one. Chatov paints the figures so that they intertwine the middle of the canvas, with the man’s pipe taking a center spot on the canvas. Is the pipe a nod to Picasso by way of Magritte? The figures are stylized and cubed–the forms that are angled feel masculine and are balanced by many feminine-feeling curves. Are the angles a nod to cubism?

The art on the wall of this couple and their newborn is modern–showing them to have the pulse of current taste. Is this obscured painting a nod to Matisse’s La Danse? I'm not sure, but I sense these are all a part of this painting as they were a part of the art world that would not have gone unnoticed by such a profoundly poetic and sensitive painter as Roman Chatov. Good paintings are timeless. They are also placeless. Though this was, according to Roman's son Marc, painted in the epicenter of Atlanta’s hippie neighborhood in the late 1960s, we could look at it as being from the 1950s in Greenwich Village, or 1890s Parisian Left Banque’s Avant-garde community. There is nothing to nail it down, so the generosity of the work allows us to wander and wonder.

I can use the colors here as cues to tie Chatov and his teacher, Robert Brackman, together for a time, at Arts Students’ League in New York. I see the characteristic cadmium red deep that Brackman taught his students to use as a resonant outline on the figure. I see the bright and warm cadmium red light, which is a part of the Chatov palette to this day. In-person, the cadmium orange, the cadmium yellow–deep and light–all shine outward like the heat of the sunshine. This is why one must see art in person. The cool, deep shadow reds, recede from the eye, and help to temper the hot forms. To me, there is safety and peace in this painting–the young dad smoking his pipe in his stylish chin strap beard, nearby his young wife and new child. This core composition is what I refer to as ‘a painting within a painting,’ and is very human and relatable.

Roman, who died in 1987, had an interesting bio which you can look up on the web as your curiosity dictates. His story goes like this: He was born in 1900 in Russia and fled with his brother, Constantin (a trained classical pianist) to Istanbul, then to Paris later arriving in New York. This immigration was after the subsequent Bolshevik Revolution in 1917 and a civil war between the Red Russians and the White Russians. Movies are made of this kind of story. His life was embedded in one of the most important world events of the 20th century; War, strife, White Russians, Red Russians, Czars, Dictators, murders, horror, gilded age, European aristocracy. One could also say those events were embedded in his life and, therefore, his art.

Eventually, the Chatov brothers came to Atlanta about the time of the premiere of the movie, "Gone With the Wind" (Roman had been commissioned to paint the portraits of Vivien Leigh and Clark Gable). By this time, Roman was a recognized artist of note having painted a series of murals for venues in New York.

“Bohemian Family” was painted in Atlanta, during the high days of the Chatov Atelier. The two brothers were so charming and so effective as teachers and artists. Their studio, which began in 1959, survives them and is popular still. Their atelier often had a long waitlist–it was a place that welcomed longing housewives and seeking businessmen who knew there must be more to life than baking and banking. Also, practicing artists would join classes to be in their studio's elegant setting–quiet, classical, draped and lighted figure, classical music. To try to count the number of artists that their studio generated into the world–still ongoing as his son, Marc, has been teaching for 43 years–would be challenging. There is no telling how many portrait artists have been spawned from the Chatov incubator. I am one, for sure, for Marc has been my primary painting teacher and mentor.

According to Marc, his father related to and admired the core values of the Hippie Movement in the US in the 1960s. Peace and Love was the motto, and that resonated with Roman. Marc tells us that Roman had hippies-freaks-long hairs–as they were derogatorily called at the time–to model for him. He chose none of those derogatory terms for his title, preferring to use the poetic word “Bohemian.” There is something of depth in the Chatov method–their teaching and painting, I call it that Russian thing, that thing that’s in the poetry of Rilke, whose time spent in Russia greatly affected his work. I’ve read this phenomenon called “ Russian brooding’; an internal seeing ‘through a glass darkly,’ deep wordless intuition, looking through a veiled curtain. It’s something more sensed than seen, much like the elements of the Eastern Orthodox Church with its visual symbolism and the stylized religious figures and icons. The feeling of darkened grottos, of prayer, deep colors, and of flickering prayer votives. I see this thing in Roman’s work here in “Bohemian Family,” and I’ve seen some of it in the work of Constantin and definitely in Marc’s paintings and drawings. It’s not a negative or bad thing. To the contrary, it is a very GOOD thing to have such depth in art rich; it’s dimensional, it’s visceral.

There is information in the shadow of composition–we as Chatov students are instructed from the beginning to “make your shadows transparent.” I feel sure Swiss psychiatrist and mystic, Carl Jung would agree for it is the psychological shadow that Jung investigates and encourages us to look into; to face. I’m reminded, also, of the Russian Oktavism and Basso Profundo. The resonant vibrations of the low octaves. That, to me, is its musical counterpart. 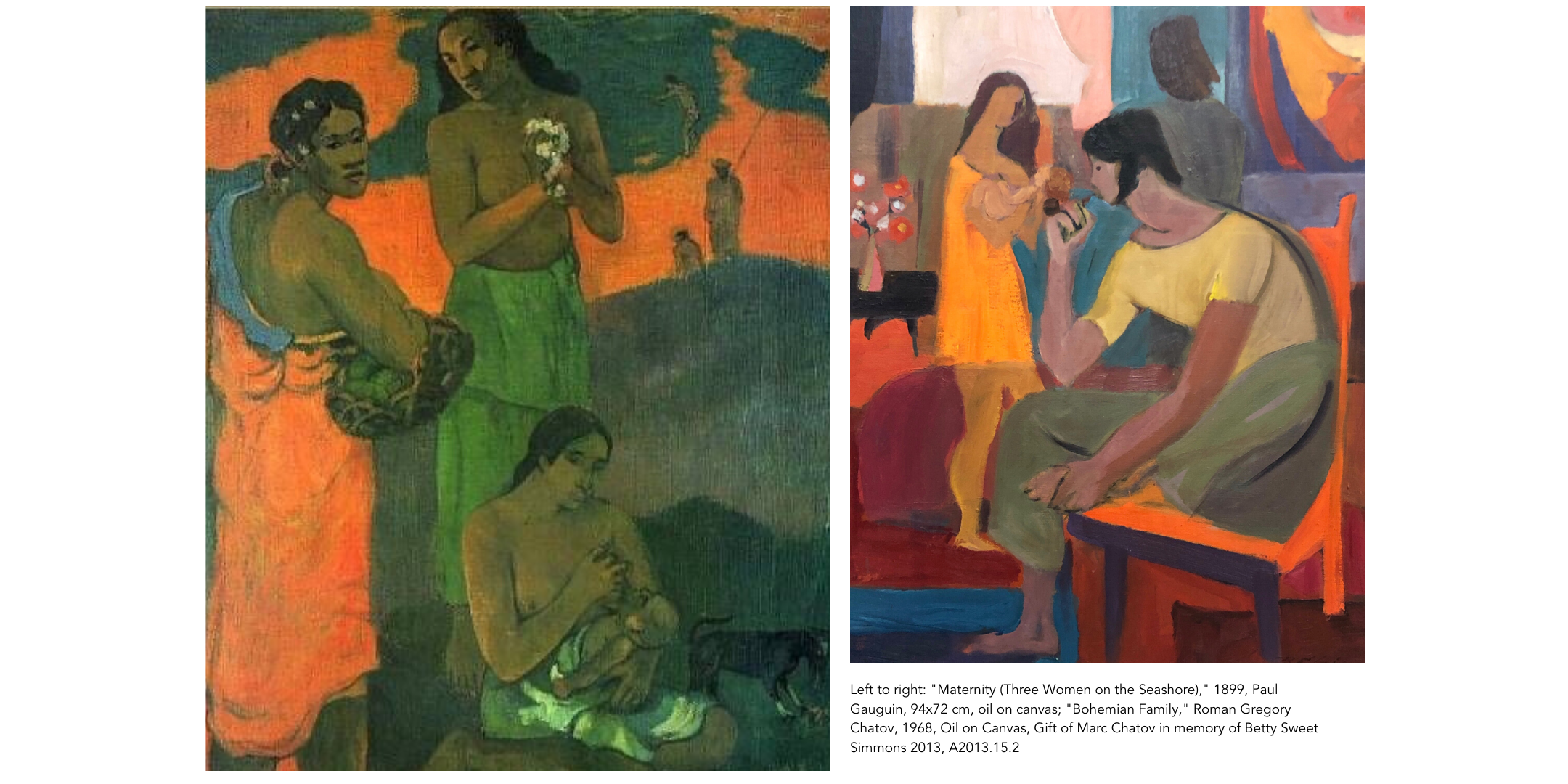 I came across this Paul Gaughin painting from 1899 called “Maternity (Three Women on the Seashore).” I find them similar in a general sense. There is also a newborn and mother in both. The way the “madonna” is holding the newborn is the exact way the “madonna” in the Gaugin is holding hers. Same angle, same head gesture. 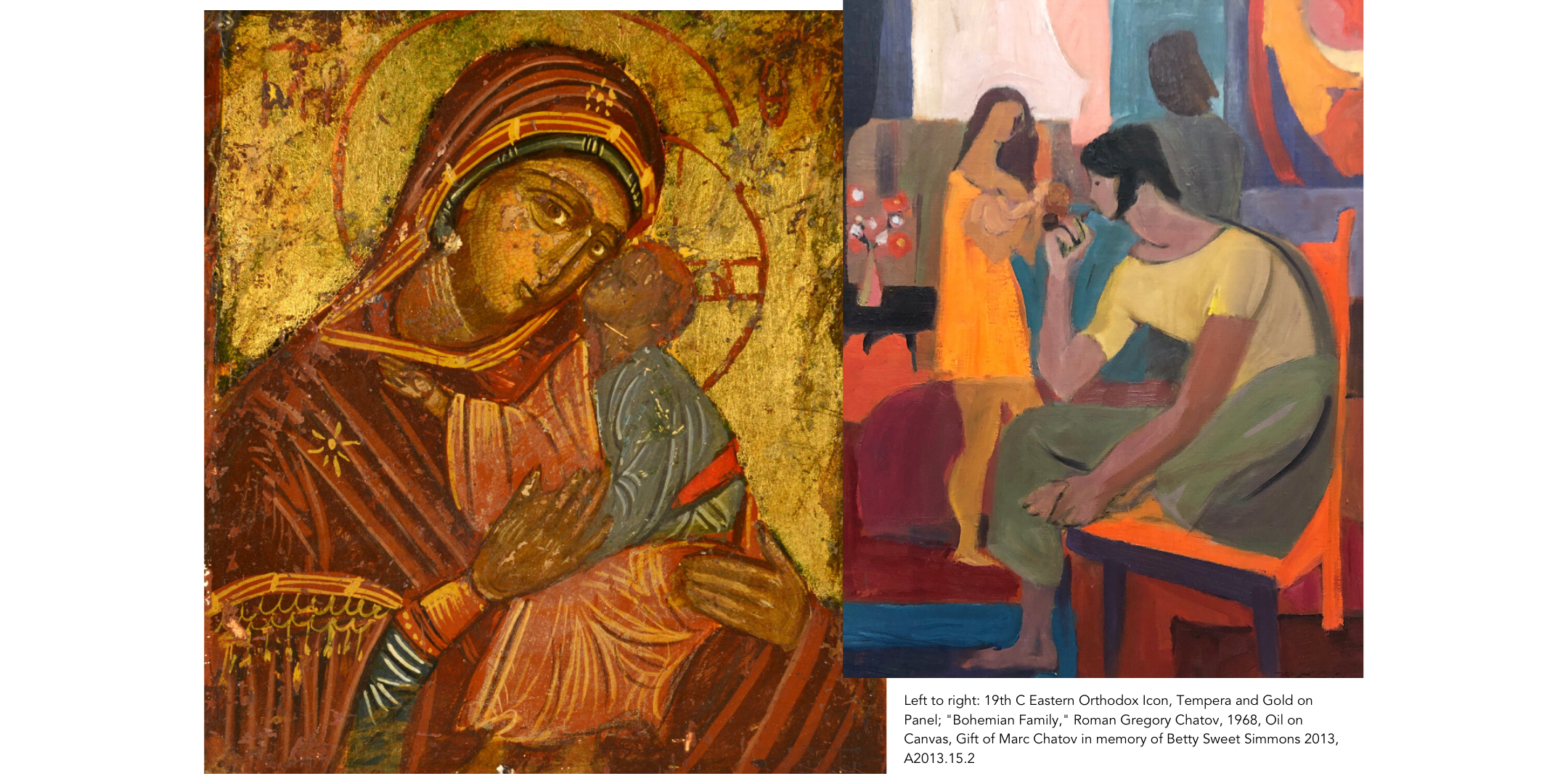 I would be remiss when discussing Chatov’s work if I did not mention the influence of Eastern Orthodox icons. Many icons being of Madonna and Christ. I was familiar with a work by him of three angels painted in the style of Russian and Greek orthodoxy. I like the overlay of the two, so you can see the essence of the comparison. I include this poem today to describe “the little painting within the painting”–that of a family in a sweet little circle, a safe bubble.

A Family Is Like A Circle
© Nicole M. O'Neil

A family is like a circle.
The connection never ends,
and even if at times it breaks,
in time it always mends.

A family is like the stars.
Somehow they're always there.
Families are those who help,
who support and always care.

A family is like a book.
The ending's never clear,
but through the pages of the book,
their love is always near.

A family is many things.
With endless words that show
who they are and what they do
and how they teach you so you know.

But don't be weary if it's broken
or if through time it's been so worn.
Families are like that -
they're split up and always torn.

But even if this happens,
your family will always be.
They help define just who you are
and will be a part of you eternally.

Thanks for following along with me on this winding road of art and life.

This week in the blog, "Impacting Education," inte

We are so honored to be a recipient of the Governo

Get into the holiday spirit with your friends and

The White Glove Sale at the MAS has begun! Follow