Posted on January 29, 2021 Posted By: sherryCategories: Reflections On Our Collection 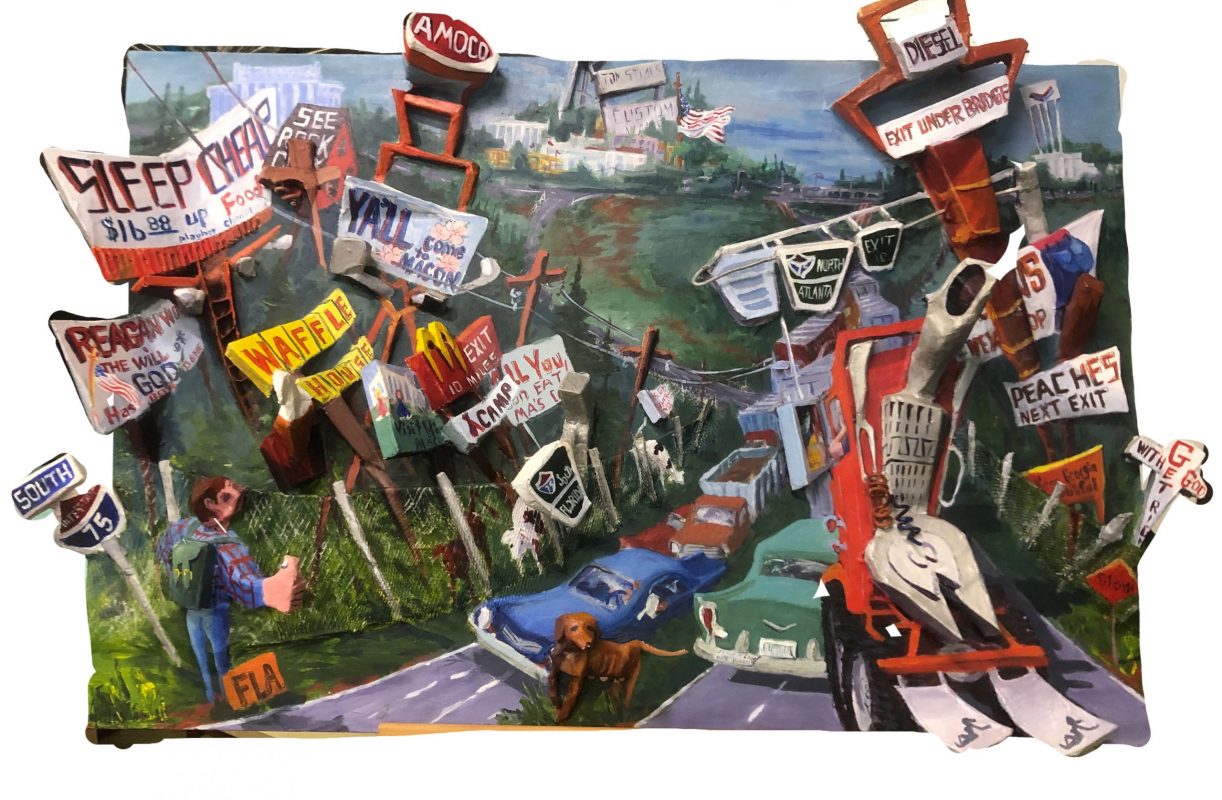 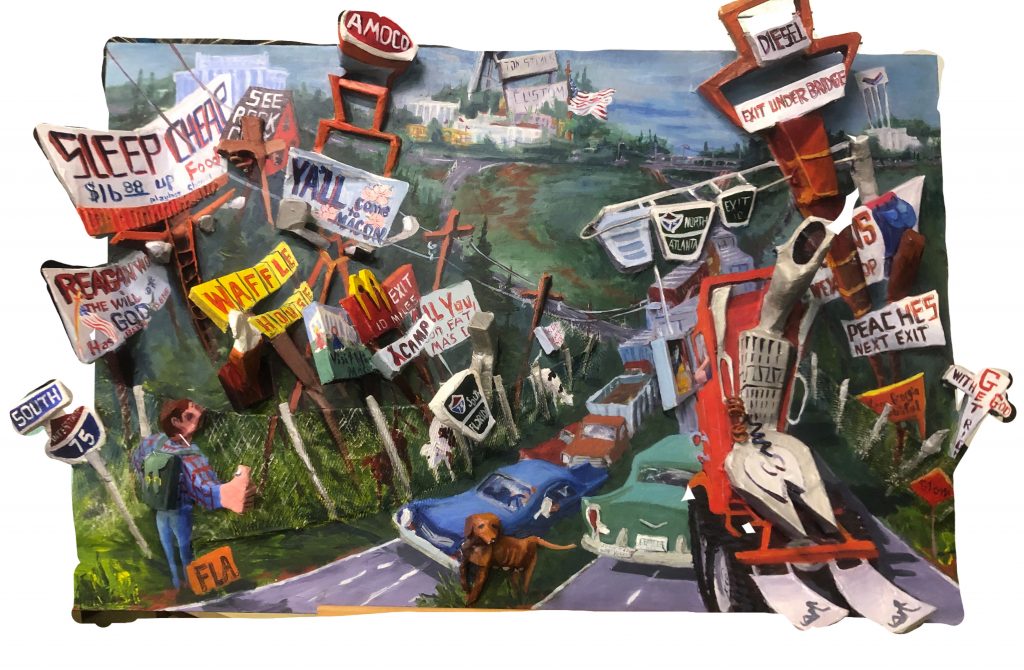 Betty Bivins Edwards was born and raised in Georgia. She creates works of art from her keen insight to what she has witnessed her entire life. Much like the Georgia writer Flannery O’Connor (who wrote near us in Milledgeville on her farm called Andalusia), she includes the foibles and peccadillos of the local people and their mores. Because Edwards employs the image instead of the word, she gets to say more with less. The same metaphors used in poetry and writing are the same ones used in visual art. If a picture is worth a thousand words, then this painting is worth about 100,000.

This piece, “Makin’ It on I-75,” was created over the course of a year from about 1986-87 and is a statement on how the interstate brought changes to the area. I-75 is the corridor of highway that connects Macon to Atlanta and is heavily traveled. I was surprised to realize that the interstate is not that old- it was just being made in the 1970s, and this painting was about 10 years later. Long enough after to register the differences between farmland and countryside and car dealerships and waffle houses.

The trickery and illusion that Edwards uses to draw us in are much like a magic show- diverting your eye here while she pickpockets your brain over there. Biblical church signage overshadows the back flaps of a tractor-trailer with pinup female figures on them- icons of the highway in the South for certain, probably all over, truckers' insignias everywhere. The use of the female form, Betty says, is used to sell, and it is no different for billboards and bumper stickers. Dare I say there’s a tactile and tacky element to this piece? I mean this in high regard! And Betty herself, I feel sure, would agree. The highway's aesthetics are not pleasing to the eye- the signage and fencing- but somehow, through her lens, it has a certain odd whimsy.

This work is part sculpture, part painting. I had a chance to pour over the piece with Betty in person here at the MAS, and you can see the conversation in the vault here on our Instagram account. Betty told me so many details, I won’t recount them all, but there is much thought in the work. Once all the illusions and allusions lure the viewer in, you are trapped, like the mother ‘dawg’ with her ribs showing and her new pup teats swinging below. Such an odd thing to say- but this hound on the street is a kind of ubiquitous sight in the South. Betty knows this because she is a keen observer of life around us here. The play on words "Makin’ (Macon) It on I-75" is another aspect of this piece's irony. 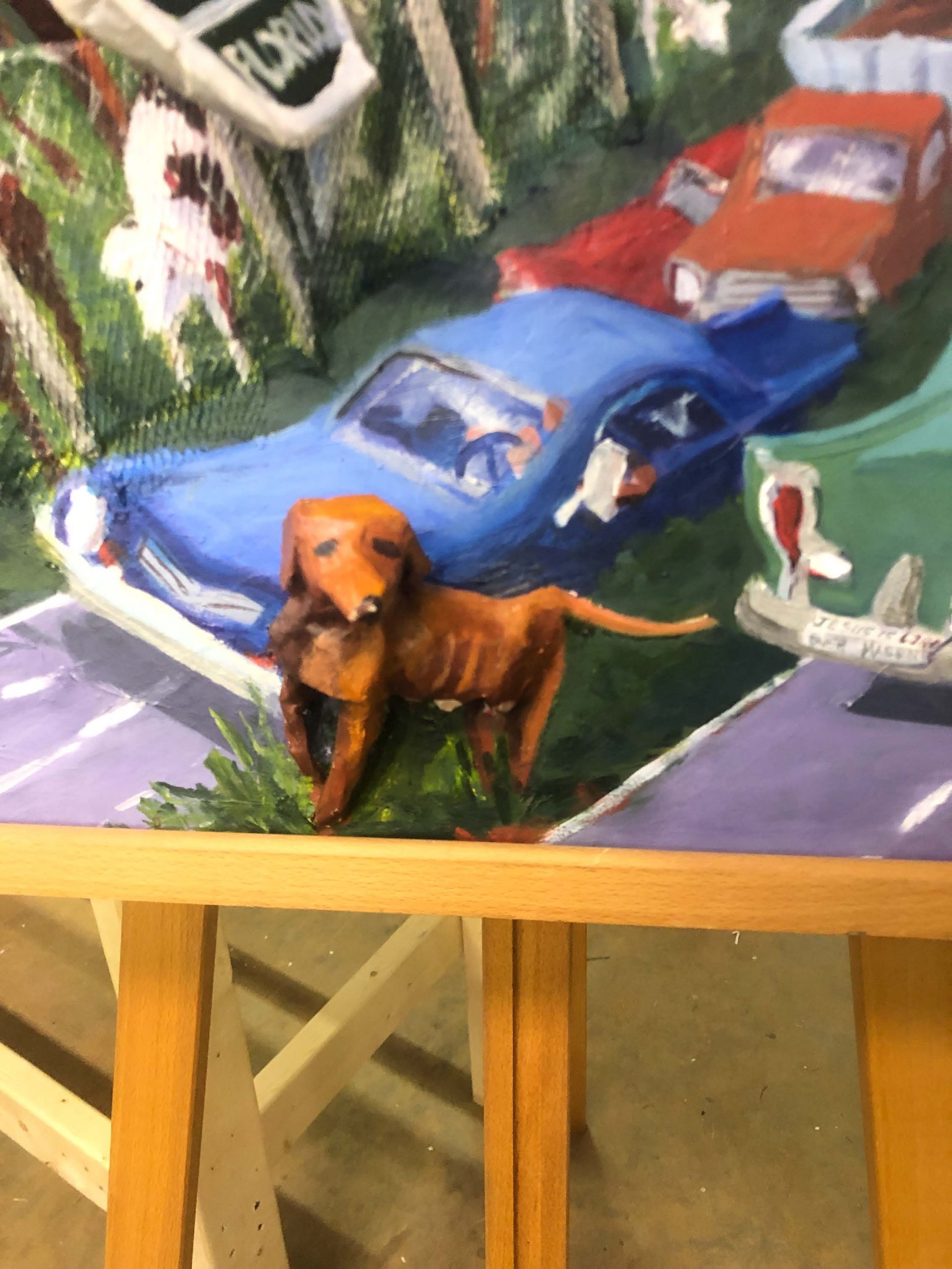 And the dog being trapped between the north and southbound lanes- in a sort of nonchalance unbothered mood- looking out at us. Such a danger to her there with speeding vehicles on both sides of the skinny grass median she’s lollygagging on. We see it- oh no! Mother dawg WATCH OUT! It causes me to wince.

The looming billboards spew words and graphics forth like an overturned milkshake in the cup console of your car, all vying for your free eye- the one that is not on the road. The ads and the premiums the places offer- “Playboy Channel” a bit laughable when you consider them- absurd almost. Edwards causes us to look at what we see all the time. LOOK. It’s all right here- the zaniness/craziness, just like Flannery O’Connor. They both knew that we Southerners are very serious about our absurdities. And also quite blind.

I found many places in the piece where Betty uses her skill as a painter to create the illusion of space and dimension and then tops it off with a 3-dimensional papier maché sculpture right next to it. It’s confusing to the brain- what she made 3d pulls along the 2d shadow throwing painting illusions. Using two illusion methods is a certain kind of genius- she points out how doubly deluded we humans can be. Illusion is a psychological and philosophical reference, especially life in the South, where the social mores are often outdated and have little relevance to modern life. And the ways are sometimes circuitous and often frustrating. Is she making fun? Or is she merely pointing it out? Like Flannery O’Connor, Betty Edwards can offer us her visual point of view on things without judging. She does not go that far- allowing us to be amused or confused by our reactions.

There’s joy in this painting- the highway's movement, the bright colors, the near cartoon-esque quality of the buildings and cars. It’s almost Disney like- or Looney Tunes. And I think that’s exactly her point- she draws us in- that vortex perspective as if all of it is being sucked inward- and once we are in-it's a wild world, we are partaking. And not quite t sure how to get out- like the funny house at the State Fair. I guess we could stop and ask for directions.

I enjoy her work so much. We have a piece called “Mama Ain’t Home, Policy Man” hanging in the auditorium. A huge fanciful piece- exaggeration and distortion are her elements of art and vehicles to parlay to you something she and only she can say because it’s her story - the stories of her world- to tell.

“Policy Man” is on permanent display. I’ll take you to see it and interpret it for you if you like- according to Betty’s descriptions to me, which can be seen here on this link.

Thanks for your support of MAS!