Posted on August 30, 2020 Posted By: sherryCategories: Reflections On Our Collection 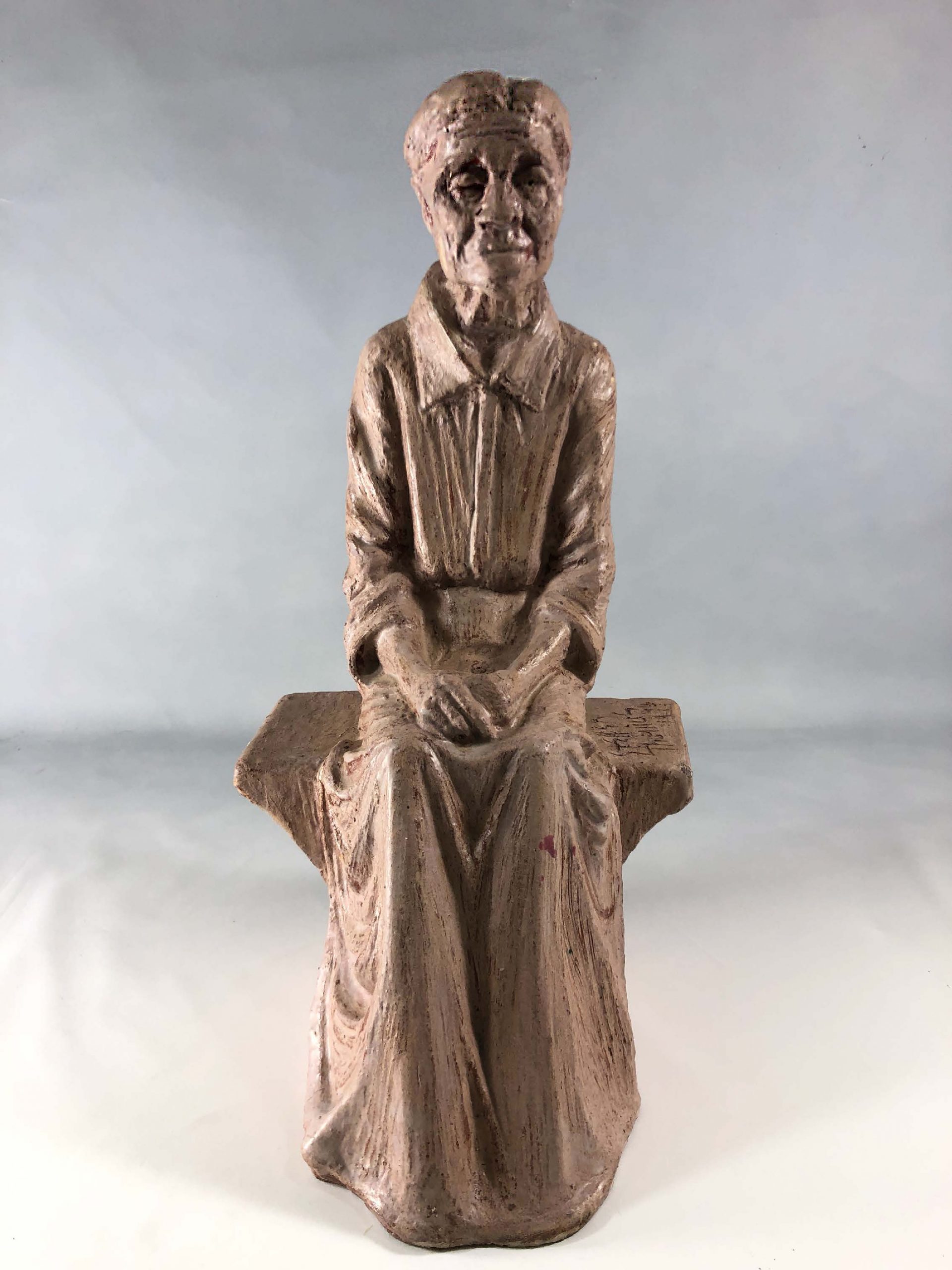 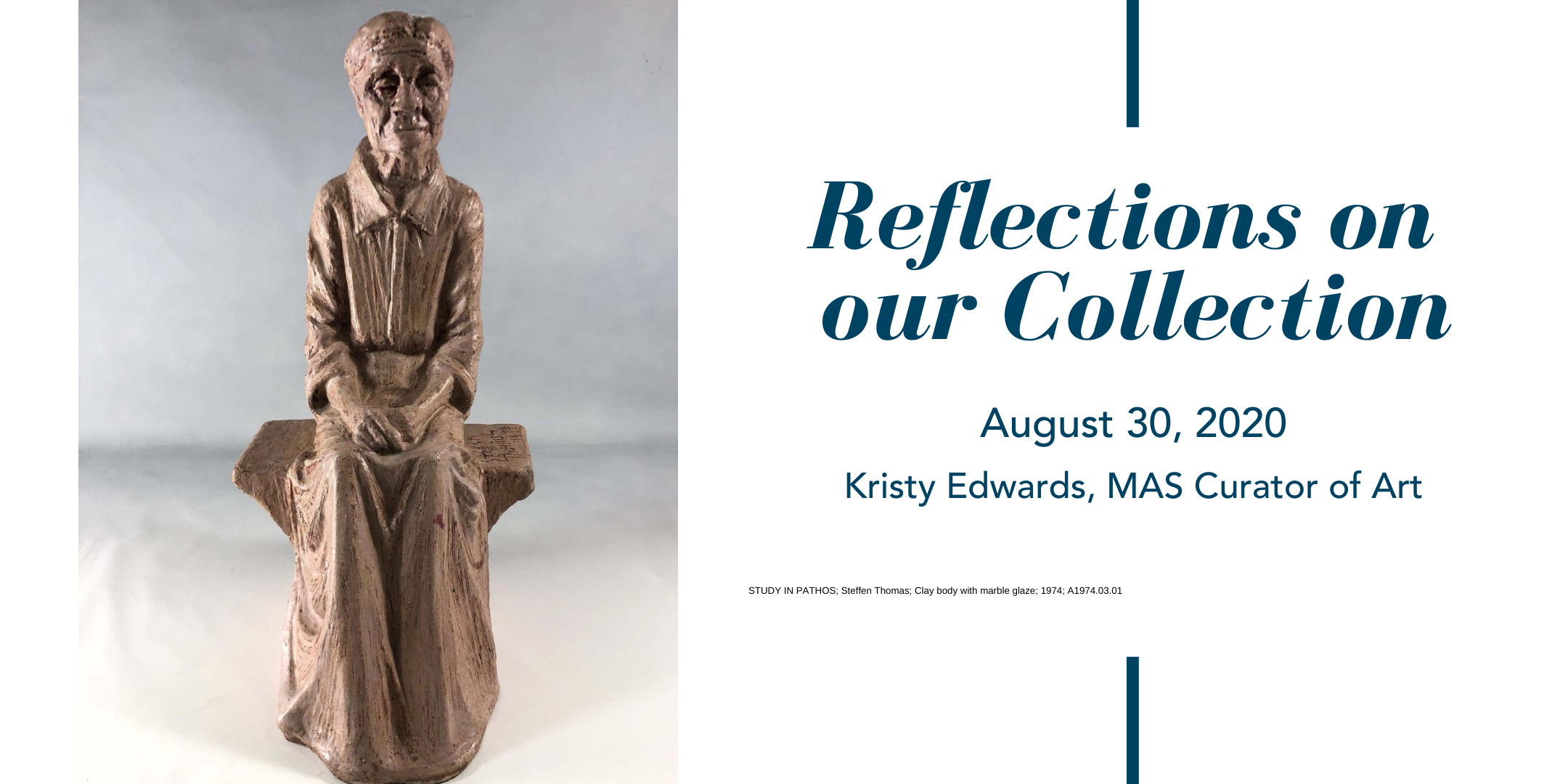 “Study in Pathos” is by famed German-born Georgia sculptor and painter, Steffen Thomas.

Our piece is a small study that was one of many begun in the 1930s and continued as a theme all the way through until the 1970s even taking form in a large monument. This glazed Georgia brick clay form is of an old African American woman who was a caregiver to an Atlanta family for two generations. In the 1930s, one of the children she raised was taking care of her at the end of her life and wanted to make a bust of her while she was still living. The woman asked Steffen Thomas to teach her how to sculpt and Thomas became enthralled with the project having seen first hand her elegance, quietude, and resilience. He joined in and made his own from life sculpture. Later, he would revisit the theme of this woman as she had made such an impression on him that he made several more studies. Later he sculpted one in bronze, one in a modified pose in a rocking chair, and then a large monument to her in welded metal which is on display at the Steffen Thomas Museum in Buckhead, Georgia. 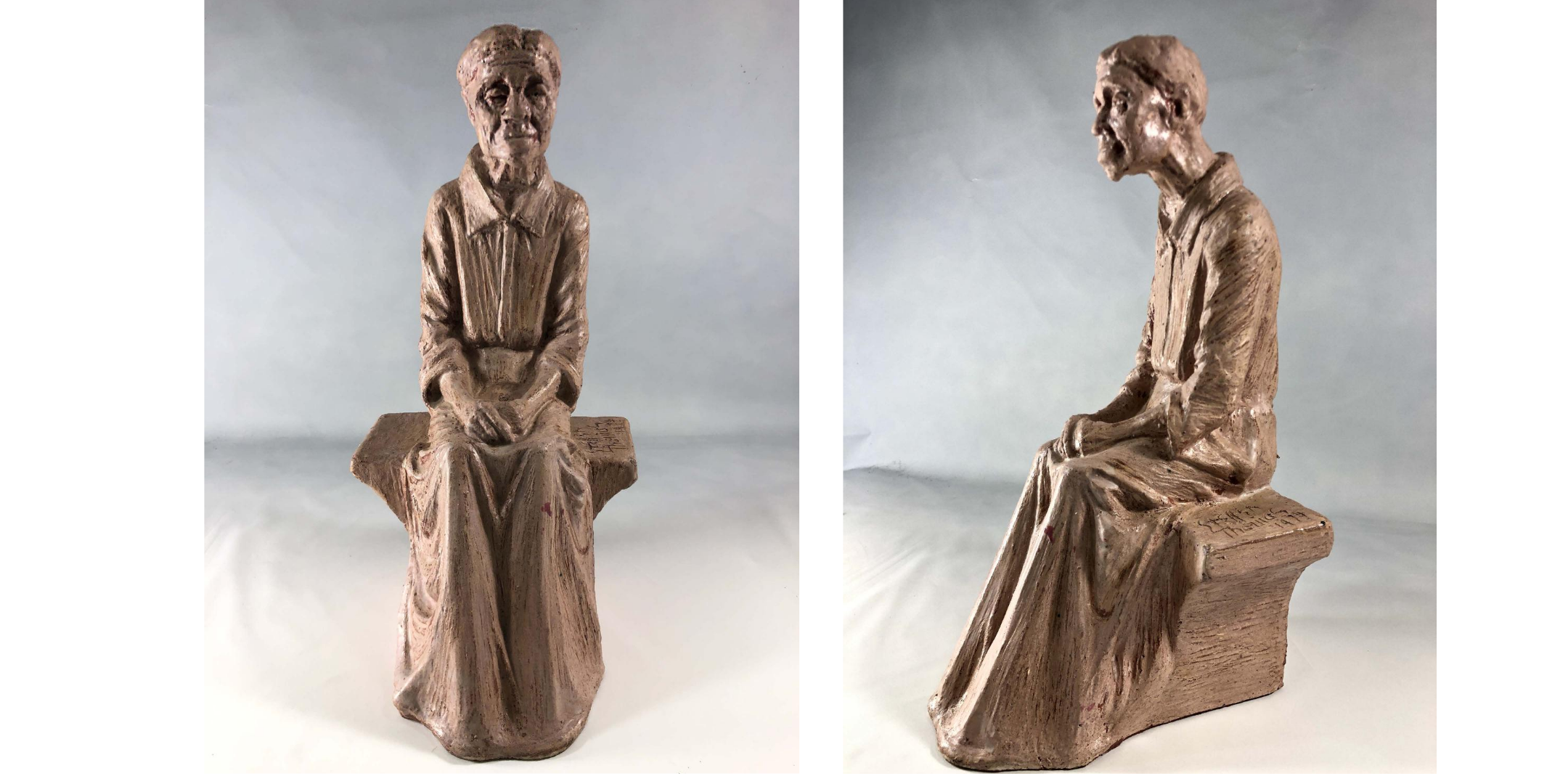 Thomas arrived on the shores of the US already having mastered sculpting at the age of 21 back in Germany. He first landed in the US in Florida in 1928 where he was hired to make sculpture for EF Hutton at his Mar a Lago estate in Florida. At a very young age, he made a living making art.

Later, in the 1930s, He set up in midtown Atlanta in an area that now includes the Woodruff Arts Center and made a studio in a house referred to as ‘The Castle’ that offered space to create for various
artists. He soon married and then in a few years, he moved his young family to Stone Mountain where he built his own house in the Bavarian style of his youth from blocks of stone and hewn lumber. From this setting he commenced to make commissions and cast tremendous sculptures - The Trilon at Colony Square in Atlanta, Herman Talmadge, and Reclining Mother and Child to note a few. He raised his family here and created a huge number of paintings, prints, and drawings. His personal style in painting is quite fluid and bold. His use of color never timid, and his thick black lines indicative of those favored by the German expressionists and most expressionist artists everywhere.

Steffen Thomas was quite a force of nature. I am amazed at the scope of his work, the prolific production of works, and the largesse of his gifts. He was born in 1906 and died in 1990. It seems he made art as soon as possible all the way through to his death.

Recently, I was asked to show our holding of his work to a filmmaker, Jesse Freeman, of Milkcrate films, who is engaged in making a documentary about the artist and his art. The MAS has one of the largest single collections of Steffen Thomas art outside The Steffen Thomas Museum of Art. Jesse was able to tell me more about Thomas and connected me with his daughter, Lisa Conner who is serving as Director of the museum that maintains and shows her father’s life’s work. She told me how he was moved to do this sculpture “Pathos” on his own, it was not a commission or for pleasing anyone. He simply felt compelled to bring her ineffable quality forth in form.

How can an artist capture the intangible in form? How does he convey what it is his eyes saw; his mind read and his heart felt? By developing what elements he had at his disposal- cues to lead us to the same feeling and conclusions of her persona. He shows that she’s upright (upright is a euphemism for admirable), her posture indicates her age but also shows her dignity and pride which runs along her spine. We see evidence of her gaunt aged figure with her draping clothes covering her near skeletal body eliciting a degree of empathy so great it moves into the category of PATHOS.

Pathos is a Greek term, one of three terms that make up a triad: LOGOS-ETHOS-PATHOS. Logos is logic and reason; ethos is credibility and trust (ethics) and pathos is emotions and values (pity or
sadness) . What are the ways he leads us to Pathos? Thomas exaggerates the form a bit perhaps, it seems plausible that the artist exploits the wrinkling of the oversized dress and the thin wrists and
sunken face to draw us subconsciously into an emotional state which he felt about the subject. We join him there looking at her and feeling her sorrows and her life’s work weighing on her as her long old neck bows forward. She seems paradoxically fragile and strong. We sense her gentle kindness in her countenance. We are able to stand in the artist’s shoes and see her because of his conscious skill. This is the call of the artist–to be the middle man so to speak, the translator, a conduit between that which we as humans sense, feel, see, and its manifestation into matter.

Our collection is 44 pieces strong and we have two sculptures as well as a number of plans, sketches, drawings, paintings, and prints. Steffen Thomas was very inventive as we have an impasto painting on a door that is hung by the holes in its hinges.

Steffen Thomas believed in the Brotherhood of Man, the interconnectedness of us all. Another favorite theme was Madonna and Child. He was a professional artist who made a living from portrait
bust and commemorative commissions and monuments that sit on grounds of institutions. He also made time to create art that mattered to him on a personal level. Most of the commissions are quite classic and realistic in their style but his own work is freer and more expressive and more in tune with his spirit and personality. Steffen Thomas left behind a valuable artistic footprint. I plan to go visit the museum in the next few weeks and see Lisa, the Director, and look at all the other iterations of Pathos. Stay tuned.