Posted on April 11, 2021 Posted By: Kyrie HugdahlCategories: Reflections On Our Collection 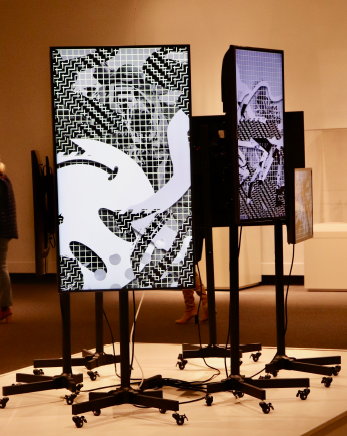 Will Penny lives and creates in Savannah, Georgia. He has his BFA and MFA degrees and is a painter, a sculptor, and a 3d computer designer while also teaching at SCAD. We have his works onsite in our Emerging National IX Show. Some of his works are based on the grid design, and he concentrates on how the artist must deal with the two-dimensional limitations of creating. In order to pull off the illusion of reality in any way, they must find a way to either break that plane or work within it by employing the illusion of perspective, shadows, and other artistic devices.

Penny gave me some thoughts about his intentions, inspirations, and work when I spoke to him Live yesterday on our @masmacon Instagram TV channel. He showed us around his studio, a space he shares with other creators. It's a "maker's space" outfitted with tables, computer screens, and walls that have spray shadows on them. Works are hanging neatly around the space. Artists studios are among some of the most sought-after images on Pinterest. We, artists and non-artists alike, can't get enough of these spaces.

Will Penny was born in 1984 in Canada. He was raised in an era of the very beginnings of home PCs. His whole world was becoming digitized before his very eyes, and he was watching. He created an installation of television flat-screen TVs on a dais in Georgia's Gallery. On the screens are layers of images and shapes; deep within the layers are buried images from art history. There is a slow movement and metamorphosis that we can watch as it's happening. It's exciting to first encounter the installation as you enter the space; this group of TV screens on legs. It's oddly, paradoxically meditative and calming. How something can be exciting and calming at the same time is difficult to explain, but it is. It has almost the effect of a water feature on the grounds of a museum or public building. It is an interesting, constant, and pleasant visual white noise. It has a similar effect on me that I experience when I encounter a wall of TV screens somewhere like Best Buy. It's a shared experience with millions of others, especially from the Boomer generation, often depicted in the 1950s/60s film and shows, showing people standing on the street peering into a shop window at the furniture style TVs that are all tuned in together. It's something those of us who know, know. His installation is called "Somewhere Else II." TV, and their first cousins, computer screens, bring images and the world to us. There is a magical quality; these enchanted screens that we never tire of and often wrestle with; our feelings, mixed.

The other works we have in the show, 2D paintings and relief fractal mirrors, are equally interesting. Here is "Static Pose I" and "Static Pose II." 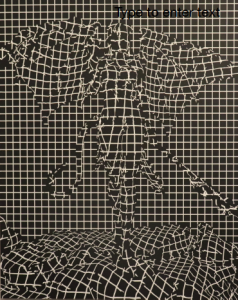 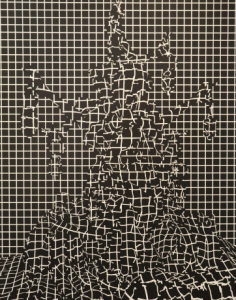 After the hanging of the works, we found out they are painted in phosphorescent paint. When the lights go out, they glow. Will Penny tucked this surprise in for us. The works stand well even without this fun effect, as works should. He has a bit of a joyful spirit in these surprises; in two of the TV monitors in the installation "Somewhere Else I," he inserts a rolling giant smiley face that makes its appearance at surprising intervals rolling in and around the screens. You have to be in the right place to catch it, so it feels like a wink from the artist directly to us. The way that Penny slightly abstracted the mythical figures in the pair of grided paintings, "Static Pose I" and "Static Pose II," was important. By doing this, it gives the visitor a chance to enter into the work without frustration; they can see something, guess at it almost like a Rorschach test, and they can project their immediate sights onto them. We are not fed the answers to what it is we are seeing. Many visitors say they see an elephant; many say a winged angel; some have said monkeys while others have said trees. The figures are actually representatives of images for a 3D printing model of two archetypal game pieces for the types of games that are interactive role-playing games. One is based on the Succubus, the female fantasy entity that beckons and seduces the males, and the other is based on a goddess of the marshes. Some have said they see - as in a Hindu god or goddess- a multi-armed goddess carrying lanterns; a 'light-bringer.' From a distance, the viewer can see that these figures seem to be trapped in a net but are in the process of bursting forth towards us. Our visitors gravitate to them immediately. 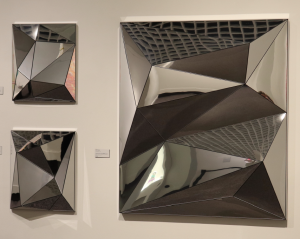 Another area of Will Penny's work on display in the Burgess gallery that visitors gravitate towards are the three fractal mirror pieces: Gamut Mirrors, XLIV, and two LIs. In these works, he takes the rectangular 2D substrate and divides it up into mathematical/geometric fractals- triangles of all sorts, and layers the surface with an acrylic mirror with this clean black edge to them. It appears the mirrors are slightly smoked, not too shiny, and silvered, so there is a non-jarring effect on the viewer. The triangles are not flat but instead are physically angled off the plane in space in a sort of geometric bas relief, causing them to pick up the things around them. One triangle picks up something above it, and another picks up something beside it, and so forth. The end effect is all this broken mixed-up perception; all of it is reality, but none of it is as we normally perceive. This makes us wonder; what is it about perception and static perception that creates our reality, and when we break that static reflection of the 2D plane, is it any less real? Not to get too heavy into that area, as brilliant work allows for; the works are just cool. They are fun. They are interesting. Simple everyday words. Human words. These words describe the accessibility of Will Penny's work. 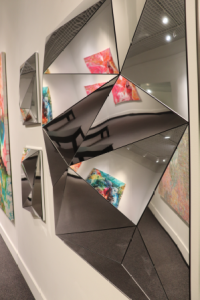 As a curator of art in the center of the State of Georgia, at an institution that, for 65 years, has held space for fine art, I am very pleased when we show works that serve as a bridge for the average viewer. Due to the lack of art in the public school system on the elementary level, it is up to places like the MAS to help educate children and the adults that did not gain the experience of looking at art through this system. It is artists like Will Penny who makes the bridge through his accessibility. By making his works relatable, interesting, and direct, he brings all sorts of people into art. His work, make no mistake, is very complex, occupies the space where math meets art, holds the thread of art history weaved through technology, and extrapolates to the future. His work is a pivot point between what has been done and what will be done.

Will and I discussed his studies as a painter and his fascination with "Dutch Vanitas" (life is fleeting) and Still Life. The opulence of 17th Century Dutch Still Life captivated his attention. "HOW DO THEY PAINT LIKE THAT" is the burning question of any young painter setting out to create and looking at art history for help. In dealing with those questions, Will created two enigmatic pieces called "After de Heem." In these two pieces of art, Will pays homage to the mastery of the Dutch painter, Jan VanHeem, through his abstracted carving shapes, borrowed from VanHeem's paintings, in foam. They are all black. They don't vie for attention but are quiet works. You might even overlook them as you move towards bigger and louder pieces. I can almost liken them to an artistic black hole absorbing light. If not for the highly reflective glass, there is no light or color; a void. I wondered as I peered into the works on the wall and only saw my image reflected on the outer glass frame, like a mirror. Is this what he means to tell us? As philosopher Jesuit Priest, Pierre Teillhard de Chardin, says :

"The being who is the object of his own reﬂection, in consequence of That very doubling back upon himself, becomes in a ﬂash able to raise himself into a new sphere. In reality, another world is born. Abstraction, logic, reasoned choice and inventions, mathematics, art, calculation of space and time, anxieties and dreams of love--all these activities of inner life are nothing else than the effervescence of the newly-formed centre as it explodes onto itself." ("The Phenomenon of Man," 1955, p. 165)

Is this glass glare reflection a hindrance to us viewing art? Our own Vanitas in our face? Being so distracted and disconcerted by my own image, I had to work to look through it to see the art beyond. I could hardly photograph them for it.

While I doubt Will had these intentions for the de Heem pieces, I nevertheless projected my experience onto them, which I thought might be an interesting layer. It is through the generosity of the artist that we indulge in the privilege of projection. It is the artist who does not spoon-feed us our experience but leaves room for us to do 'our thing' with their work, to whom I am most grateful. Thank you.

I've said this many times; art has to stand by itself, alone. It does not need curating. You are free to ponder it and project, but having some sort of guide, as in a curator or an interpreter, makes art even more meaningful. It is then you uncover the depth and complexity of art as you connect with the intentions and thought of its creator, you truly can be transfixed and transformed.

Please come see Will Penny's work. All of the pieces serve as a sort of installation in that you are invited by him to engage. I'm not sure all paintings do that- but his do.