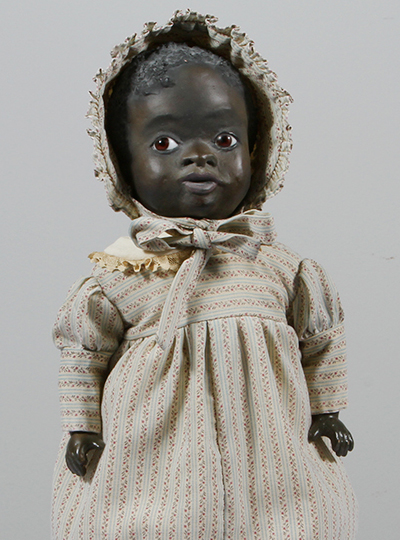 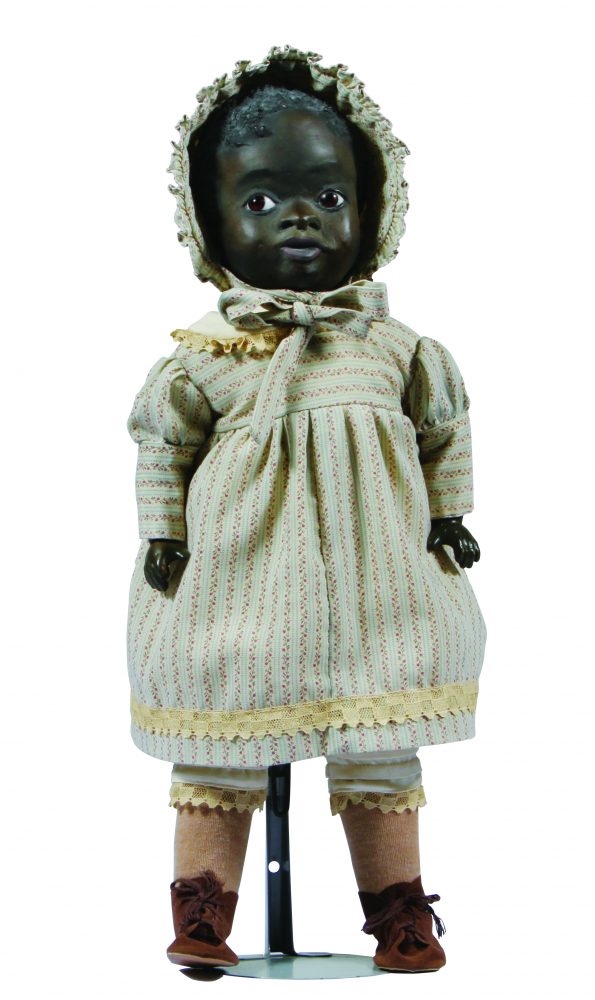 Nettie, 1928
Artist: Leo Moss/Georgia
Papier-mâché and fabric; clothing not original
Museum purchase with funds donated by the Museum Guild, Inc.
A1992.04.01*
20” tall with the signature “M” incised on the back of the neck.

The Museum’s collection has always piqued my interest because I am a collector of many things. And because the Museum’s vault is filled with diverse collections, there is something for every person. My favorite collectible is dolls, and I have been collecting them since I was born because my mother loved dolls and began purchasing them for me the second she knew she was having a little girl. My collection has grown over the years, and I have dolls in all sizes, made of various materials and by artists near and far, but one doll artists’ creations have eluded me — those of Leo Moss, and the fact that the Museum owns one makes my tenure at the Museum even more special.

I started my Museum of Arts and Sciences’ career right in the beginning of the holiday season and the CELEBRATE! exhibit was being installed. One of the vignettes depicted Colonial America Christmas, and there in a case was one of the most fascinating dolls I had ever seen. As we prepared for the Festival of Trees in the next few weeks, I would sneak in the CELEBRATE! exhibit to look at “Nettie,” a doll made by Leo Moss, an African American artist who was born in Macon. One of the main reasons I was drawn to Nettie was the raw emotion in facial expression. She has a tear on her cheek, and I have the urge to hug her and console her each time I see her. Leo Moss has a gift of tapping into that raw emotion with his dolls. There are two theories as to why many of his dolls appear to be crying. One source claims that Mr. Moss sculpted the faces of toddlers who sat for him, and whenever a child cried, the portrait doll would then have tears on its face. Another theory is that Moss began adding his signature tears to his dolls after his wife left him for a toy dealer from whom he purchased supplies for the dolls. His wife, Lee Ann Moss, took the youngest of their five children and left him to raise the remaining four on his own.

Another uniqueness of Moss’s dolls is the way in which they are fabricated. According to Steve Roark Allgood, owner of several Moss dolls, “Leo Moss was a handyman by trade. He traded for chickens and vegetables to feed his family. The dolls were made from paper scraped from walls, boiled and made into a paste. Each head was molded individually and colored with a spray gun. The heads were sprayed with boot dye and stove blacking, and the glass eyes were brown and inset into the heads. However, a few had painted eyes. Their hair was molded, and their nostrils were usually pierced. Bodies were cloth with legs and arms mostly composition.”

Photographer Steve Eilenberg wanted to know more about the composition of the Moss dolls, so with the help of a radiographer, he obtained scans of three Moss dolls. He found that Moss had used dolls manufactured by companies such as Effanbee and had covered them with his special composition of papier-mâché and transformed them by molding larger lips, broadening the nose, adding molded hair and adding dark glass eyes over the area where the original doll head’s painted eyes were located. Eilenberg thought the white spots throughout the body cavity might be cotton seeds. One doll had scraps of paper wadded up in one leg and neatly rolled papers in the other leg. I was intrigued about the making of these dolls and Eilenberg’s findings. That made me wonder what might be inside of Nettie behind that sweet, tearful face. We may never know, but I will continue to enjoy her as long as I work at the Museum of Arts and Sciences.

Have you checked out our Science on a Sphere® (SO

Any weather expert or enthusiasts around here? Com