Posted on January 9, 2021 Posted By: sherryCategories: Past Exhibitions 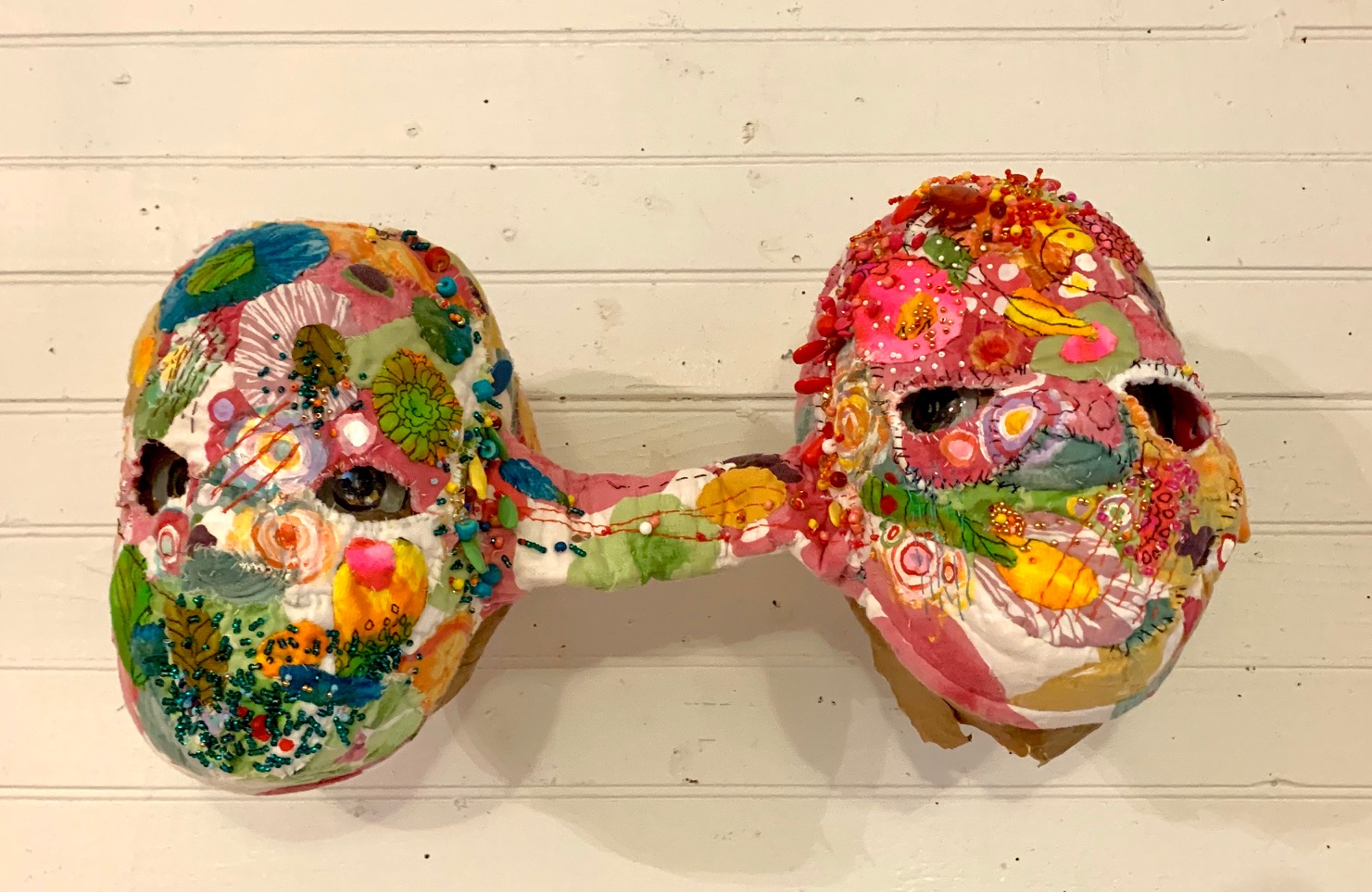 Intriguing soft sculptures adorned with embroidery, beads, and textiles address psychological issues related to the COVID19 pandemic and civil unrest. Florida-based artist Linda Hall creates surfaces that capture beauty and humor yet reveal the compulsive process of adornment. This series explores unanswerable questions such as "What holds us together?" and "Who are we as individuals and as a country?" By covering the entire face, differences such as race, gender, and economic status dissolve into a shared experience. 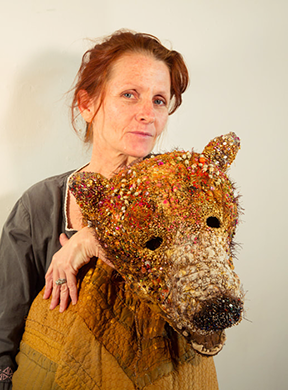 Florida-based Artist Linda Hall makes fantastical, sublime sculptures and mixed media textile assemblages informed by current events and heightened by the subconscious mind. Created in quarantine and fueled by contagion fears, Linda Hall’s current body of work includes nearly 30 sculptural forms that capture the emotional turmoil of 2020. She explores the face covering and its power to conceal and protect through mixed media assemblage, soft sculpture, and papier-mâché, incorporating beads and found textiles collected through the years.

“With the worsening pandemic and eruptions around race it was hard to be idle,” said Hall. Posing questions like  ‘What holds us together?’ and ‘Who are we as individuals and as a country?’ conflated the artist’s dark internal dialogue with her love of beauty. The complexities of 2020 “set the stage for finding comfort in handmade masks.”

Textiles repurposed into theatrical face coverings take on new life. Hall’s sculptures recall tribal rituals, Dia de Los Muertos carnival chaos, and even the drama of Japanese Noh theater. Elaborate two-headed coverings (like “Together But Separate” mask) mock functionality to capture the duality of distress and pleasure like conjoined twins. Hall animates the macabre with intricate beading and adornment to create surfaces that writhe and glitter, alarm, and allure.  The individual disappears behind the mask.

“By covering the entire face, differences such as race, gender, and economic status are gone. It is my intent to create surfaces that capture beauty and humor yet reveal the underlying anxiety of these times. There is almost a humorous quality in the evidence of compulsive process of adornment.”

Both unsettling and comforting, the mask iconography serves as a visual stream-of-consciousness narrative of this shared 2020 experience, which continues to unfold and build.  Because we all have a frame of reference for this abstraction, Hall’s body of work is psychologically immersive and oddly intimate. Rather than attempting to imitate the external forms of humans or beasts, Hall concentrates on the essence, soul, or experiential nature her wearer might attempt to recreate.

With her paintings and sculptures, Hall produces alter egos. Human forms morph into beast-like creatures to “emphasize their interrelation of identity—an interrelation that also speaks to the deep interconnectedness of life in the age of catastrophe in the natural world by global warming and other manifestations of the physical intrusion of humans in the natural world.”

“I want the sculptures that I make to function as containers for spirit. Sometimes bare, sometimes adorned, they create a space to be filled with unfamiliar and elusive intensities: an animal energy that suffuses what is human, and a humanity that resides in objects and beasts. The resulting work aims to provide the substance of things both feared and hoped for, the evidence of things unseen.”

Hall earned a Bachelor of Fine Art from Florida State University and a Master of Fine Art from the University of North Carolina. She lives and works in Tallahassee, and has exhibited her paintings and textile assemblages throughout the Southeastern United States. Learn more at www.lindahallart.com