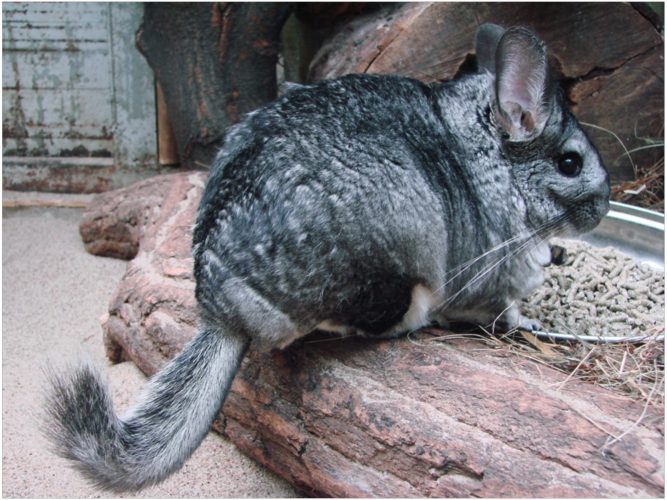 The chinchilla is a small, plush rodent, native to the Andes Mountains of South America, whose name is derived from the Chincha people of the same region. The species’ soft fur made them an ideal target for trapping, and eventually their passive behavior and delicate features allowed for easy domestication. This process started back in the 16th century when trappers would keep certain Chinchillas to breed in captivity. Today, Chinchillas are typically bred on farms and have become a popular household pet.

In the wild, chinchillas find habitat in burrows or crevices in rocks. They are social creatures, typically living in herds that can range anywhere from fourteen to one hundred chinchillas in number. These herds not only provide social interaction but protection against predators. Wild chinchillas are typically hunted by snakes, canines, felines and birds of prey. The have some defense mechanisms at their disposal, namely incredible agility that allows them to often out-maneuver their predators. Most chinchillas are capable of leaping up six feet to avoid predators.

The chinchilla is separated into two species, short-tailed and long-tailed, the latter being the slightly smaller and more commonly domesticated of the two. Chinchillas check most boxes for being a decent household pet. Their small bodies and plush fur allow for easy handling. Chinchillas have a perky disposition yet remain docile, they are low-maintenance and refrain from making unpleasant noises. While not technically nocturnal, chinchillas are at their most active in the evening and morning hours but often remain active throughout the day. Their diet consists of typical store-bought rodent pellets and grass hay, and due to the unique properties of chinchilla fur, they require dust baths rather than wet baths. The species has an unusually long lifespan for a rodent, ranging anywhere from twelve to twenty years in length, making them a delightful family companion.

Sadly, both the long and short-tailed species were placed on the endangered species list after their furs’ commercial value rose dramatically through the late 19th and early 20th century. A hunting ban in 1929 only increased the value of their fur, and it was not until 1983 that hunting laws in Chile, Peru, Argentina and Bolivia were strictly enforced.

The species is now listed as “critically endangered,” despite more intense hunting laws. Wild Chinchillas are still illegally sought for their fur, and alternative operations like the Chilean mining industry have lent to the continued decline of their population. In spite of all this, there remains hope for the species’ population. The captive breeding of chinchillas has helped to prevent further illegal hunting and trapping of the creatures while continued domestication has slowly allowed for the rehabilitation of the population.

Both of the Museum’s lovable chinchilla’s, Tootsie & Dr. Pepper, will be available for meeting Saturday during Mammal Mayhem.