Posted on September 27, 2020 Posted By: sherryCategories: Reflections On Our Collection 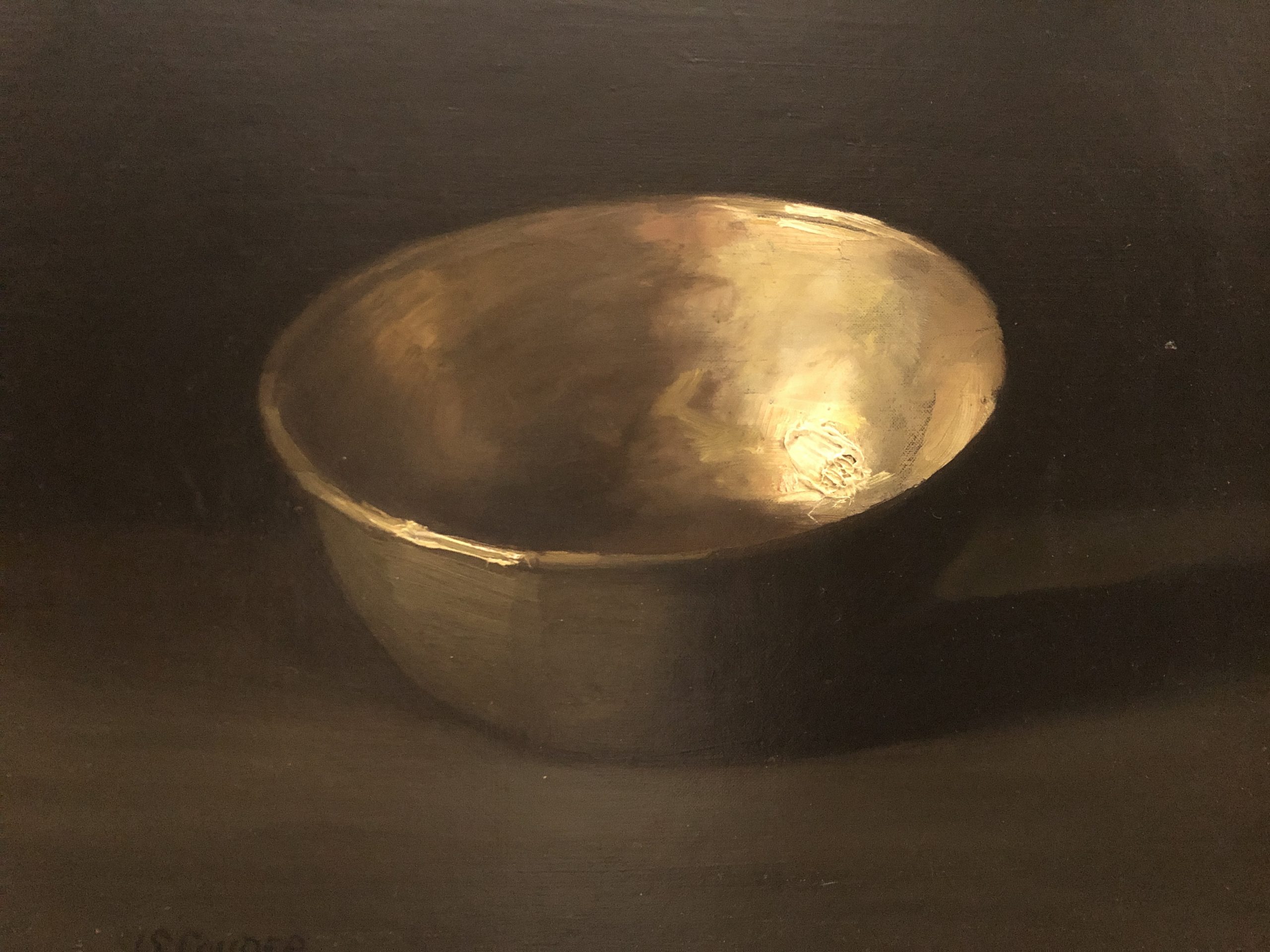 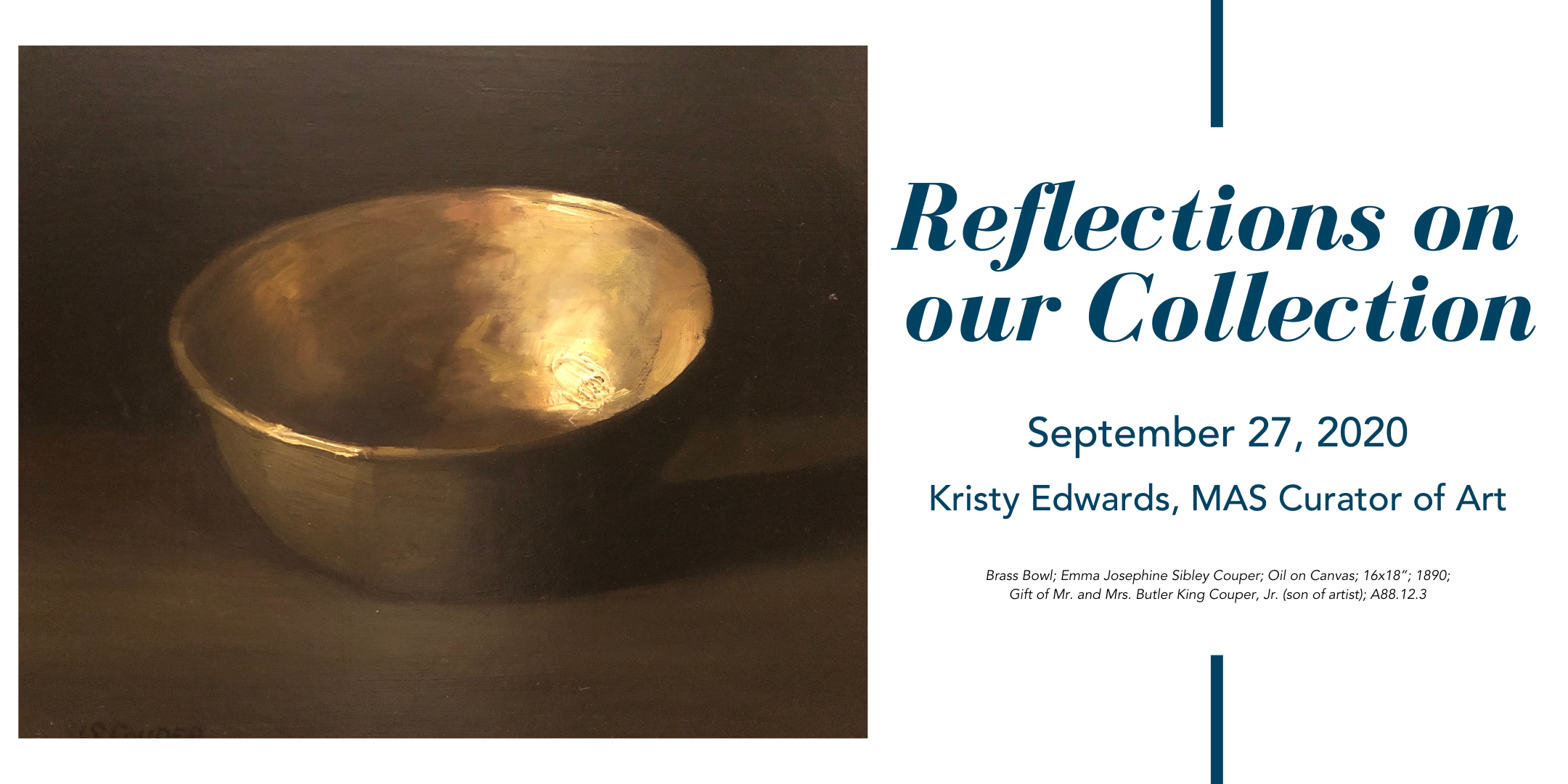 It gives me personal delight to choose this piece to write to you about today. As a curator, I get to make choices, sometimes, based on my own personal taste, my own love as an artist. I am inclined to paint like this bowl is painted. This is my personal artistic “jam” as they say. And therefore, I understand this painting to my very core.

What we have here is a quintessential example of the genre: STILL LIFE which is the close artistic study of an object(s). This bowl is quite plain, quite ordinary, and indeed quite still. So still, in fact, unless it is banged or tapped to emit some sound, one might never notice such an object. Why would Josephine Sibley Couper have chosen such a dull (but shiny) object to lay down on the canvas for posterity some 120 years later to be noticed? Why not flowers, fruit, or books? A brass bowl? It is because she was a consummate artist and devoted painter. Because she was always, until her death, a student. And the study of such an object in all its plainness and hidden artistic technical complexity proves the fact.

It is in this very choice- the choice of one object with no concert of colors, no adornment, no distraction of the cloying beauty flowers proffer us that belies her success as an artist. To be constantly growing and improving as a painter, one must choose and commit to difficult subjects just for the sake of their exercise. It’s very zen so to speak, to partake in the depth of a single simple object. And to choose a single bowl- visually having to deal with the parallel curves that must be correct is a challenge. But to choose a BRASS bowl, with its reflective qualities as well as its patina, is even more so. And because there are no other elements involved, Couper is challenged to make that bowl sing. 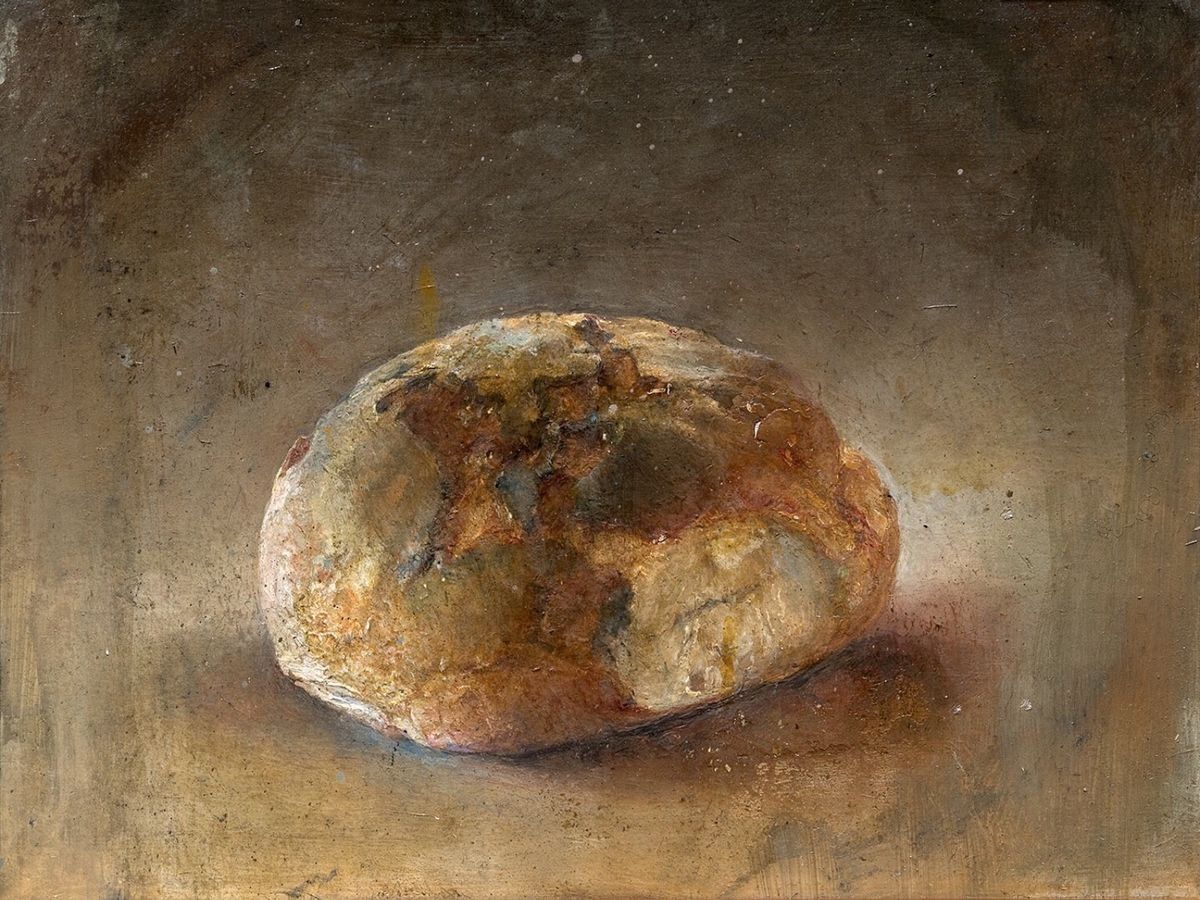 Her work here is timeless. There is nothing in this painting, not tricky trendy brushwork, not plasticware or fashionable color choices, that place the object in any particular era. It could be 500 years old or it could be the modern and current work of British painter Julian Merrow-Smith in Provence or Jean Baptiste Simeon Chardin from 18th century Paris. There are also some 18th-century French paintings by Anne Vallayer Coster that I’d like to mention since she, too, being a woman in a stultified world, painted against the odds to mastery level. Even the stark imperceptible ground and background edge call to mind some of present-day Odd Nerdrum’s still life work.

Brass Bowl is worthy of museum walls or the walls of a lakeside cabin. This bowl makes no mention of class, provenance, race, or religion. It could be a bowl used by Buddhist monks in sound bathing or by a cook for a wealthy family in England in the Edwardian period we see so often in shows on television.

This is the very definition of “classic”.

Let’s talk a bit about her. We hold over 250 works of her lifetime of painting. Josephine Sibley Couper was a Georgia born and raised painter who grew up at the same time as famous American painters, Mary Cassatt and Cecelia Beaux, who were from the northeastern US and much closer to the art scene budding in America. Couper was also female but born further away in the deep south and she did not have easy proximity to fine art studies which meant that she had to work that much harder to get to them, to find them. And as a woman, she had to insist and insist consistently to get to them.

In further research, Josephine Couper might be called our Southern Cecelia Beaux, their works are so similar in style, color palette, execution. They shared similar teachers.

Around 1880 or soon after, She studied at the newly formed (still going strong) Arts Students League in New York founded in 1875. It is here in New York that she was influenced and taught by two greats, William Merritt Chase and Robert Henri, who shared their wealth of skill and knowledge to students from all over. Henri, in particular, was a magnificent teacher. His beloved book “The Art Spirit” is held as a must-read by all realist painters to this day. It is within the Arts Students league that the major movements of American art fomented and grew. That Couper was there, as a Southern-born and bred woman at that time, is quite notable. This speaks to her sheer grit to get there.

In the essay by Dorothy Joiner published in the catalog from the 1992 show of our holdings here at The Museum of Arts and Sciences in Macon, we know that Brass Bowl was painted while in class under William Merritt Chase at the League. Joiner says “Couper’s bowl prompted her teacher, William Merritt Chase to regret not to have painted it himself.” !

As an artist, this is exactly how I wish to paint: a straightforward, honest, and intelligent interpretation of the reality which in front of me. It’s a sense of reality caught by denoting the clarity of light falling across a dense, hard, reflective material- a light that is rich in an entire color theory course, a light that requires a number of techniques such as impasto and transparency in the shadows to identify. Also, the effort must begin with very grounded and confident employment of perspective and draughtsmanship, which I consider to be the architecture of realism painting.

Painting is magic. We are looking at trompe l’oeil- a French phrase describing a genre of art that ‘fools the eye’ and looks real. This is a flat 2-dimensional canvas. Within it, a woman picked up a brush and some paints and created an illusion of reality that marvels us.

As your curator, it’s my role to slow you down. It’s my pleasure to help you pause, look deeper, and consider more. As an artist, I can offer you facts and points of view on how to look at art.

We have hundreds of examples of Couper’s work and it is my hope to get some of them which have never been shown in front of you in the gallery soon. I can see the American masters’ influences in her portrait work as well and am reminded of another contemporary Southern female painter, Kate Flournoy Edwards of Marshallville. Her dates and her story overlap Couper’s and Edwards studied similarly. Edwards’ portraits are still on the walls of my friends and family’s homes.

Couper paints all three major genres; the portrait, the still life, the landscape, to mastery level. In fact, I would venture to say that this simple painting of Brass Bowl is all three- a portrait of the bowl, a landscape of the bowl, and a still life.

Enjoy your day while you look around you at the simple beauty of ordinary items present in your life. Things you pass by all the time without a thought.

May your attention grow more refined and your sense of presence increase,