Posted on April 7, 2020 Posted By: sherryCategories: The Sweetgum Trail 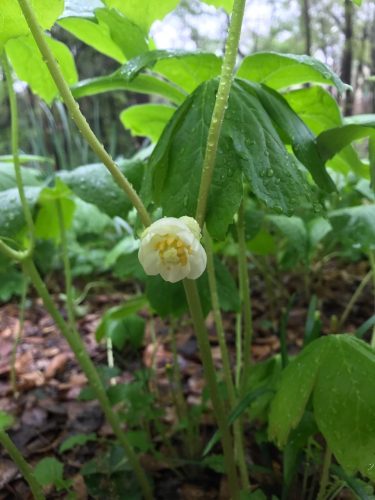 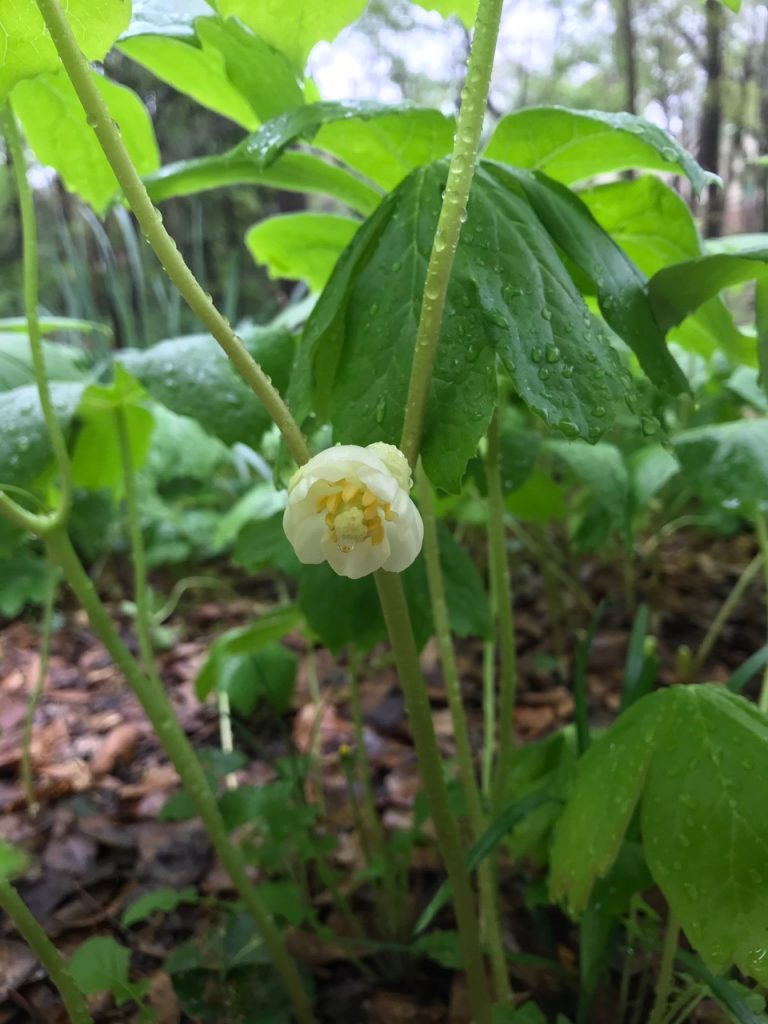 The Mayapple is a unique and historically significant plant.

Spring has recently arrived in Georgia, and native plants are sprouting up in the woodlands across the state. The Mayapple (Podophyllum peltatum) is a unique plant that grows as large dense mats in open woods, often near a water source such as a river, creek, or swampy bottomland.

The Mayapple has a unique combination of only two leaves and one flower. When the plant first begins to sprout, the leaves remain closed around the top of the stem until it has reached its full height (1 to 1.5 feet). The leaves are rather large (6 to 8 inches across) and form a showy and conspicuous umbrella atop the stalk of the plant. A Mayapple patch growing in the forest looks like a vast field of small green umbrellas that have suddenly popped up from the ground. Because of these umbrella-like leaves, a passerby may never even notice the beautiful bloom hidden underneath.

The single Mayapple flower is found in the axil of the leaves. That means it is located underneath the leaves where they meet the stem. The flower nods or droops beneath the leaves and is typically white, but can sometimes be a beautiful rose-color. The bloom has six to nine waxy petals and is adorned with many stamens. It is the flower that gives the plant its common name of Mayapple. Its bloom arrives in May and has a strong resemblance to the flower of the apple tree.

In the fall, the Mayapple bears fruit that also nods or droops just as the flower did and resembles a large fleshly lemon-shaped berry. The Native Americans and Early Settlers used the fruit as a source of food. They would make jams, jellies, and pies. However, the consumption of the fruit is where you have to be extremely careful. The leaves, roots, and unripe fruit are poisonous. Eating any part of the plant can cause various unwanted symptoms like excessive salivation, vomiting, diarrhea, headache, fever, and even coma. The fruit is only edible once it has reached a particular stage of ripeness.

What makes the Mayapple most impressive is its use as a source of medicine. The symptoms of vomiting and diarrhea made the plant ideal for Native Americans to use as a way to purge one’s body. The Cherokee would soak the root in whiskey and take it for rheumatism. They would also boil it and eat it as a purgative. Another use was to dry it and pound it into a powder and use the powder on skin ulcers and sores. They also believed that you could juice the root and put drops of it in a person’s ear to cure deafness. Another interesting use of the root by the Cherokee was as a soak for corn before planting to keep off crows and insects as the corn grew.

Using Mayapple as a source of medicine has even been used in modern times. Research into extracts from the Mayapple has shown evidence that they can inhibit cell division, thus blocking new growth of tumors. In Europe, various cancer drugs were derived from these extracts. Medications containing Mayapple extract have also been used in the treatment of Sexually Transmitted Diseases.

Mayapple has proven to be quite an intriguing and beautiful plant. If you would like to learn more, explore the Native American Ethnobotany Database, Lady Bird Johnson Wildflower Center, and the USDA Plants Database.