Posted on September 20, 2020 Posted By: sherryCategories: Reflections On Our Collection 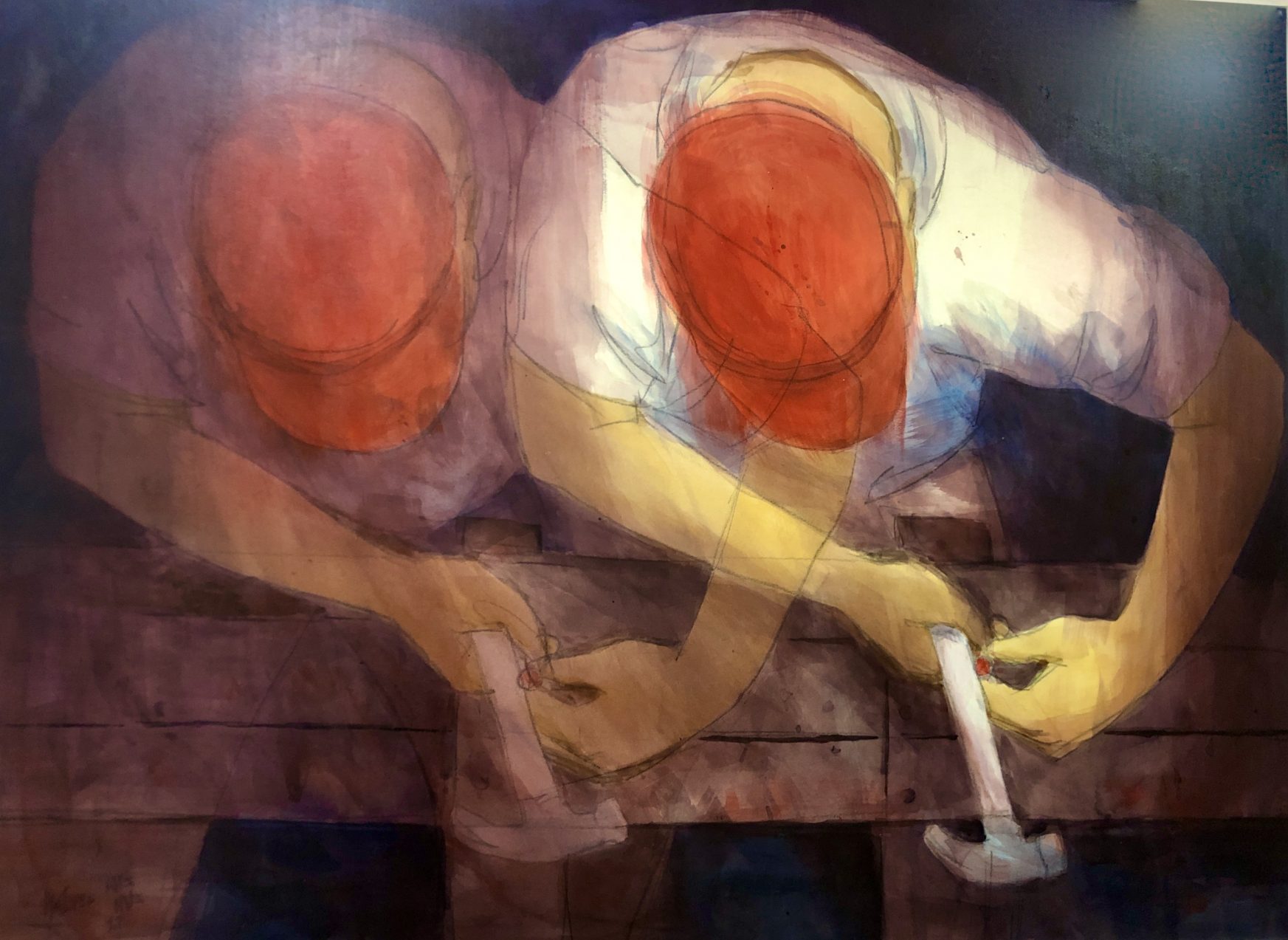 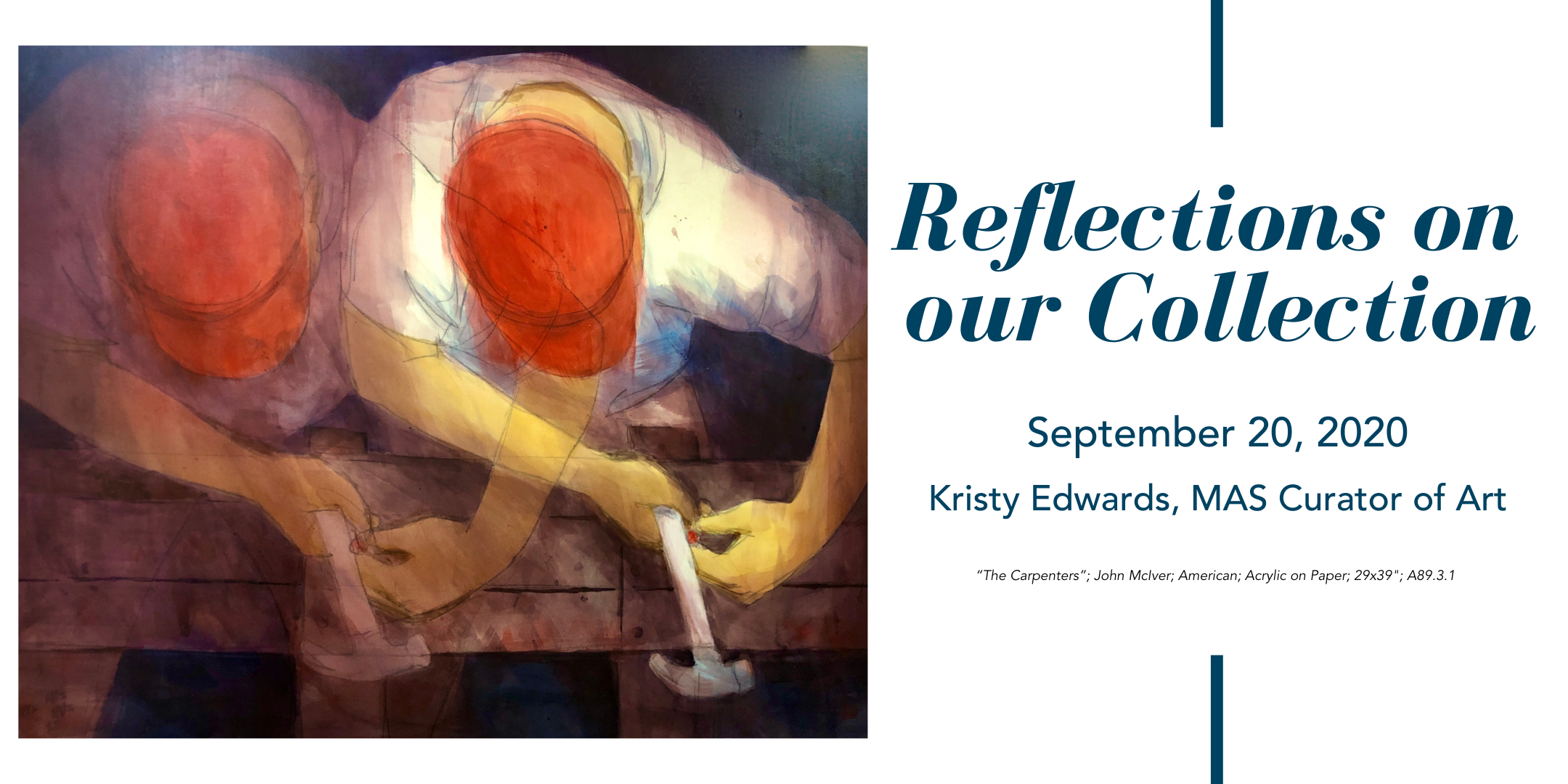 I am enthralled with this painting. It’s a great size- big enough to make a statement but not looming and visually cumbersome. It’s 29x39” and the two figures and their shapes fill the space so that it is fairly intimate- you are there looking on the scene from a close vantage point.

This painting, by Jacksonville, Florida born John McIver, is painted in acrylic on paper. Acrylic is a water-based medium and can be thinned for transparent passages much like watercolor which makes for a natural transition in medium for McIver as he moves from watercolor realism to his later abstractions. McIver was well adept in watercolor painting having been a long time member of the AWS (American Watercolor Society). You can see the watercolor techniques in play here though acrylic paint is bound with plastic instead of gum arabic- the primary binder of watercolor. Also, what distinguishes this from watercolor- TRUE watercolor- is the use of opaque white to mix tints and also to denote the local color of white. In pure watercolor terms, there is no white paint to be used and if a tint is called for, then the white of the paper itself is employed in the transparent layering of color so that it shows through and creates visual mixing.

This aspect of technique is what demands of watercolor its customary respect as it is very tricky to pull off and manage. The use of white paint in watercolor can cause the colors to be less pure; to appear chalky. I am including a watercolor of McIver’s that we also have in the collection here: 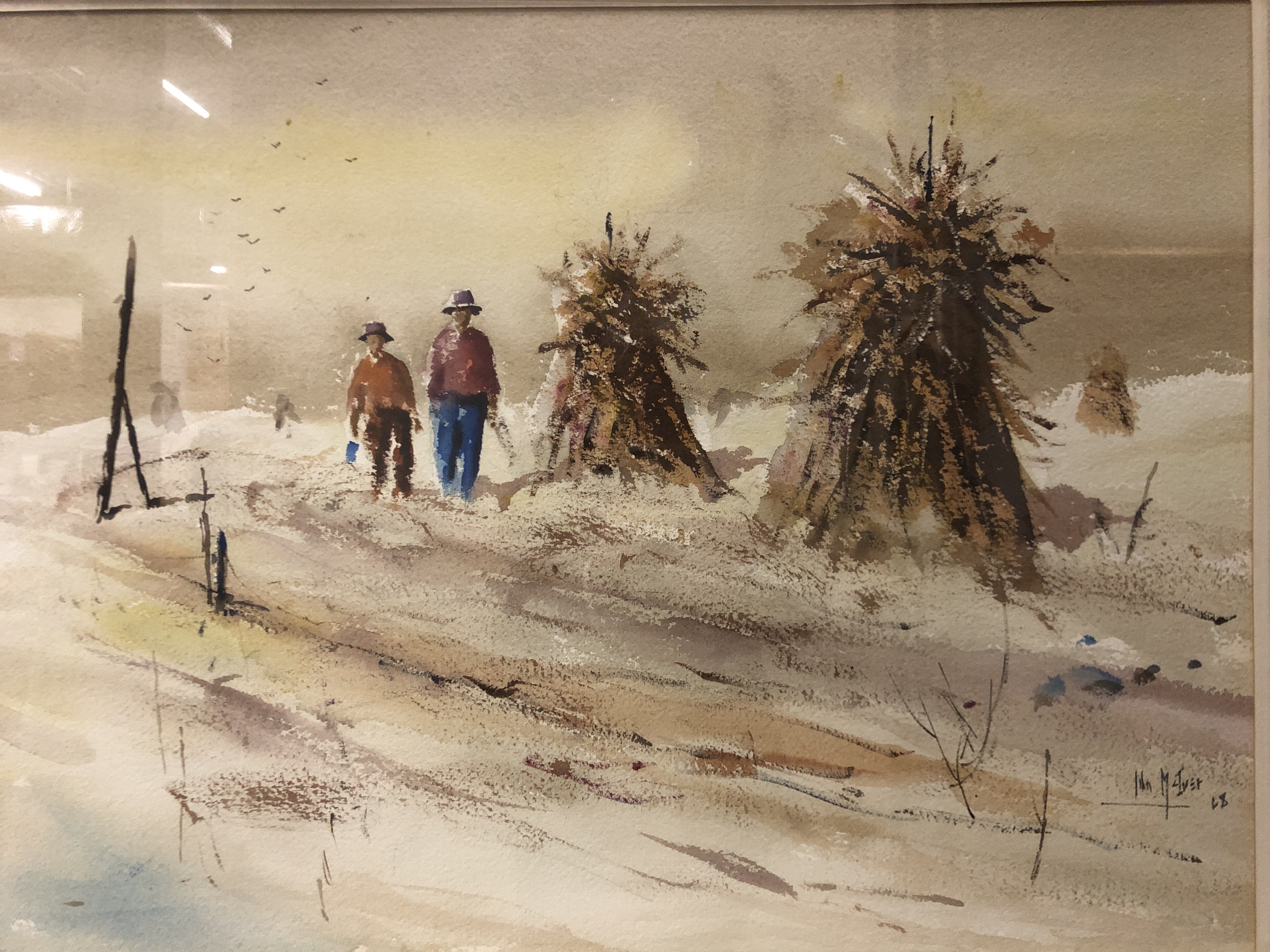 You can see that there is no white paint used here but the white of the paper is what informs the snow and the sky.

“The Carpenters “ is an interesting piece to me. The title Carpenters is plural so this must mean there are two distinct men. But I get the feeling it is one man depicted twice as if he is moving. I also get a ‘vibe’ from it- a sort of commercial 1970’s vibe- perhaps because it uses the color palette that I feel I was raised around- orange/vermillion and browns. Also, I am privy to his other works here that appear to have some intrinsic style that was the pulse of the 1970s, a freedom of expression meets commercialism, that was used in advertising, television, billboards, magazines, in the ‘70s. It is words like HARVEST and colors like gold and earthy greens that were used to manipulate consumers to buy everything from knit clothing to stoves to cars.

"The Carpenters" is visually interesting. I love how McIver keeps the drawing scribbles and planning in the painting. I am always a fan of left construction in a painting. The architecture exposed to the viewer is depth giving. What we have here is interesting, too, in that we have two figures offset and one overlaid as if in a transparent animation sequence. This is showing the movement of the carpentry work, the moving down the line of nails to be hammered. The repetitive motions - perhaps tedious in life- are denoted by these devices (transparency overlay and overdrawing). This movement is also indicative of the artist's movement from realist watercolor into acrylic abstractions he has been creating for a long time now. This piece could be the overlap between those two artistic movements in McIver’s life. Things in this painting that point towards abstraction are the fact that we can see only the top of the carpenter’s head in his red cap- this becomes a flat perspective and therefore begins to be abstracted. This piece has a little something for all of us- classical draughtsmanship- watercolor transparencies- animation-abstract expression. The Carpenters is an important work for us to have, in my curatorial view, because it is a pivot point between his former watercolor techniques and realist representation, and in this piece, he just barely starts to unravel into abstraction and idea. His works in the 1990s are all purely texture and abstractions. He says he “went” abstract in 1993 as if he had some sort of spiritual or psychological revolution and epiphany. To use that phrase tells me he gave way into the flow of the creative process, sometimes unfolding life long- and dove deeper into what was already pulling and capturing his attention - to disassemble the reality he had heretofore been constructing.

Here are some of McIver’s other works from a google search. He has been a member of all the prominent art societies and has all the proper credentials. His work is held in over 2 dozen museums and institutions. His work strengthens our own collection, YOUR collection, by supporting our mission and goal to hold pieces of American Contemporary artists. He is still going strong according to my knowledge and lives now in Hickory, North Carolina.

According to a piece on the Hickory Museum of Art’s web page in 2019- McIver began as a self-taught watercolorist and worked in realism/representation. He found himself being swept into the movement of Abstract Expressionism. McIver was born in 1930 so the decades after were strongholds of Abstract Expressionism, inspiring and affecting almost all corners of art-making. McIver often worked in series- which means an artist will take one painting or idea and make variations on it and create relative and connected works. I feel that we are lucky to have one of his realist watercolors, however stylized it is, as he did make a break from it later. It’s nice to have a piece that represents eras of an artist's working growth. We also have two in a series of abstracts shown here: 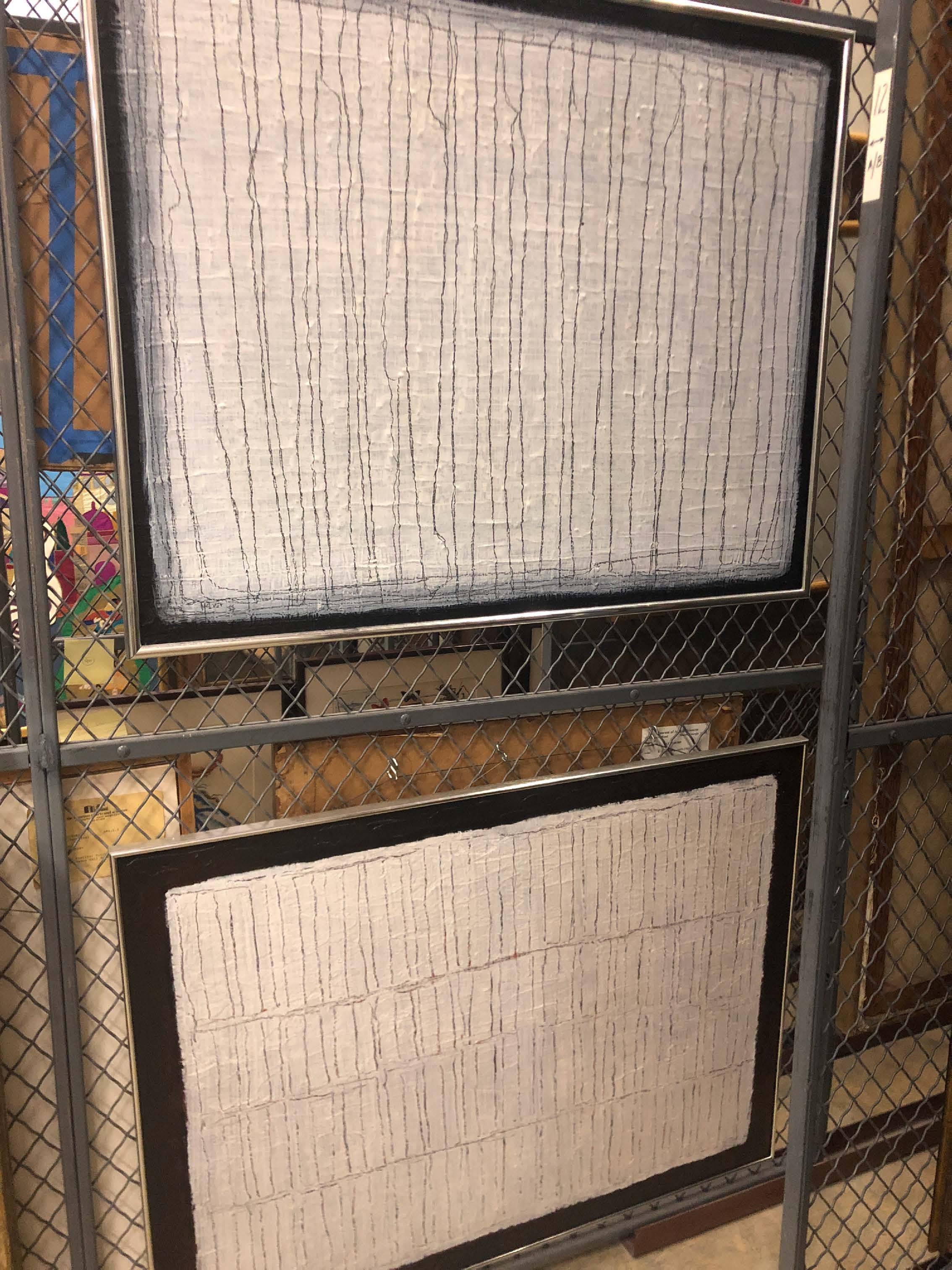 McIver says in an online interview I read that his only teacher of watercolor was John Pike in Woodstock, New York. Pike was an illustrator and watercolor painter. You can see his work here and possibly connect it to our piece, Harvesters, certainly in brushwork and the handling of the medium. Pike was a sort of mid 20th century Winslow Homer and moved to the Bahamas at one point and we get some pretty well-done storm, ocean, beach scenes like Homer’s. Often, as a curator, I look for the artist’s teachers and influences. These are very important and provide provenance to the work of an artist, especially if our held pieces were done in the atelier or under the tutelage of a rather famous well-known artist. Such is the situation with McIver. John Pike is an American watercolorist to treasure and his work resides in the Smithsonian Museum of American Art.

We are happy to have these four McIver paintings in our permanent collection. He represents an era of American painting. Enjoy the remainder of your weekend! My Best, Kristy Edwards Curator of Art