Posted on February 2, 2021 Posted By: sherryCategories: Past Exhibitions 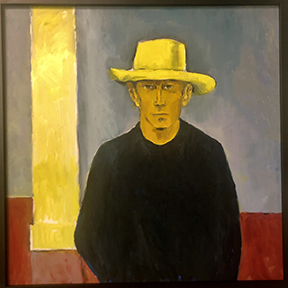 William Segal, whose works we are gifted because he was born here in Macon, Ga and it was his wish for them to return to his birthplace, was a life-long seeker. He spent much of his time looking carefully at the world around him, where he was, what he saw, who mattered to him. From all this introspection and observation, we have tangible works of his efforts to find clarity to the mysteries of being alive in his unique time and place.

Segal, living and working in the publishing sector of New York in the mid 20th century, was constantly engaged in the aesthetics of his world.  He also spent much time in France, in the country of New Jersey, and at the sea in Long Island. Segal was enthralled with what caught the eye and why. He was devoted to spiritual practice and found painting to be a way in which to translate meditation and seeing into works of art.

You are invited to use Segal’s honored tradition of SLOW LOOKING here in the Alexander Gallery. Challenge yourself to spend 5 to 10 minutes gazing at each painting, taking it in, and considering its aspects. Slow and deep looking is the method Segal applied to his whole adult life and especially his art.

Enjoy the peace and calm state that comes from spending time with art and in a quiet mindset.