Posted on September 13, 2020 Posted By: sherryCategories: Reflections On Our Collection 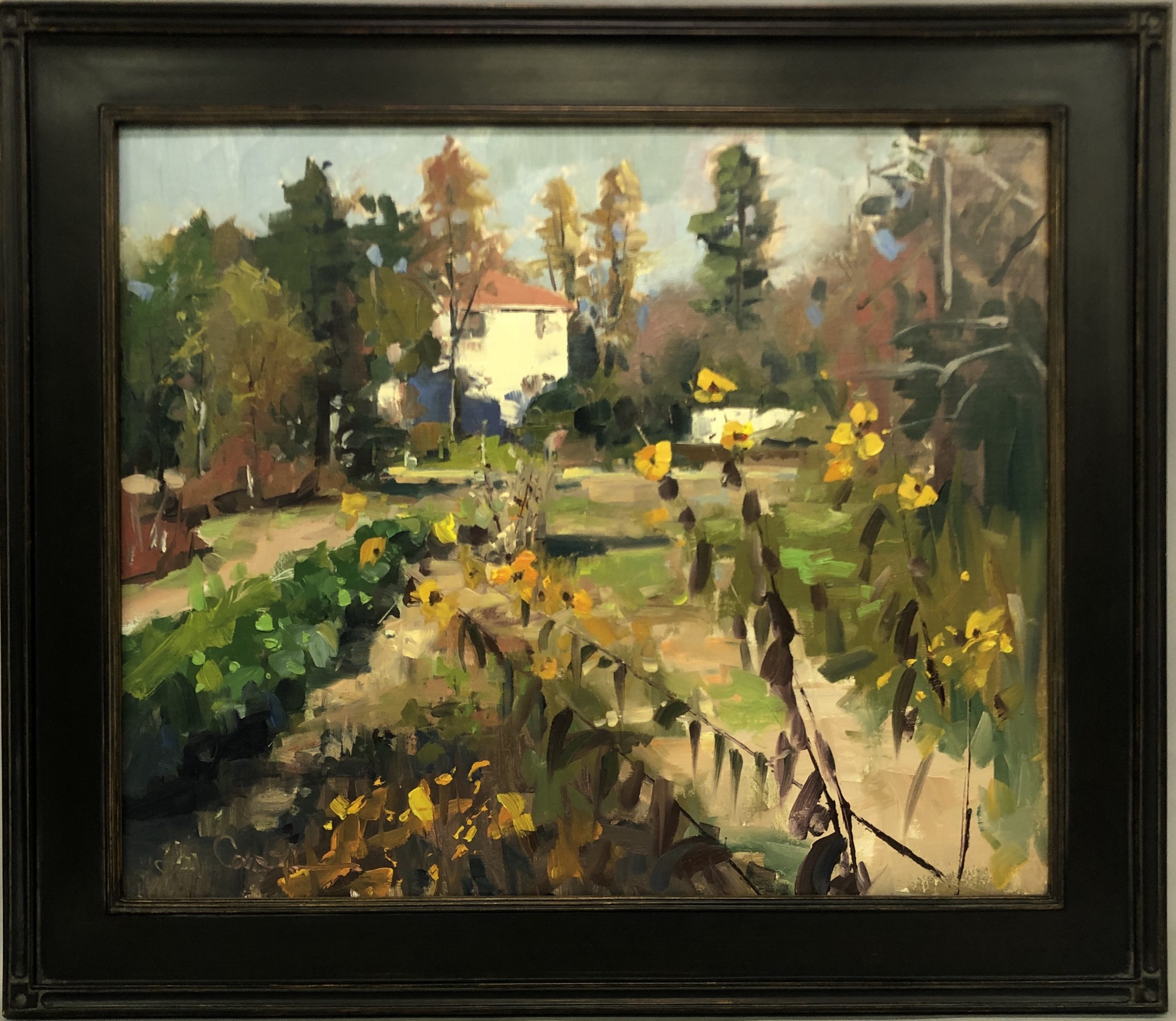 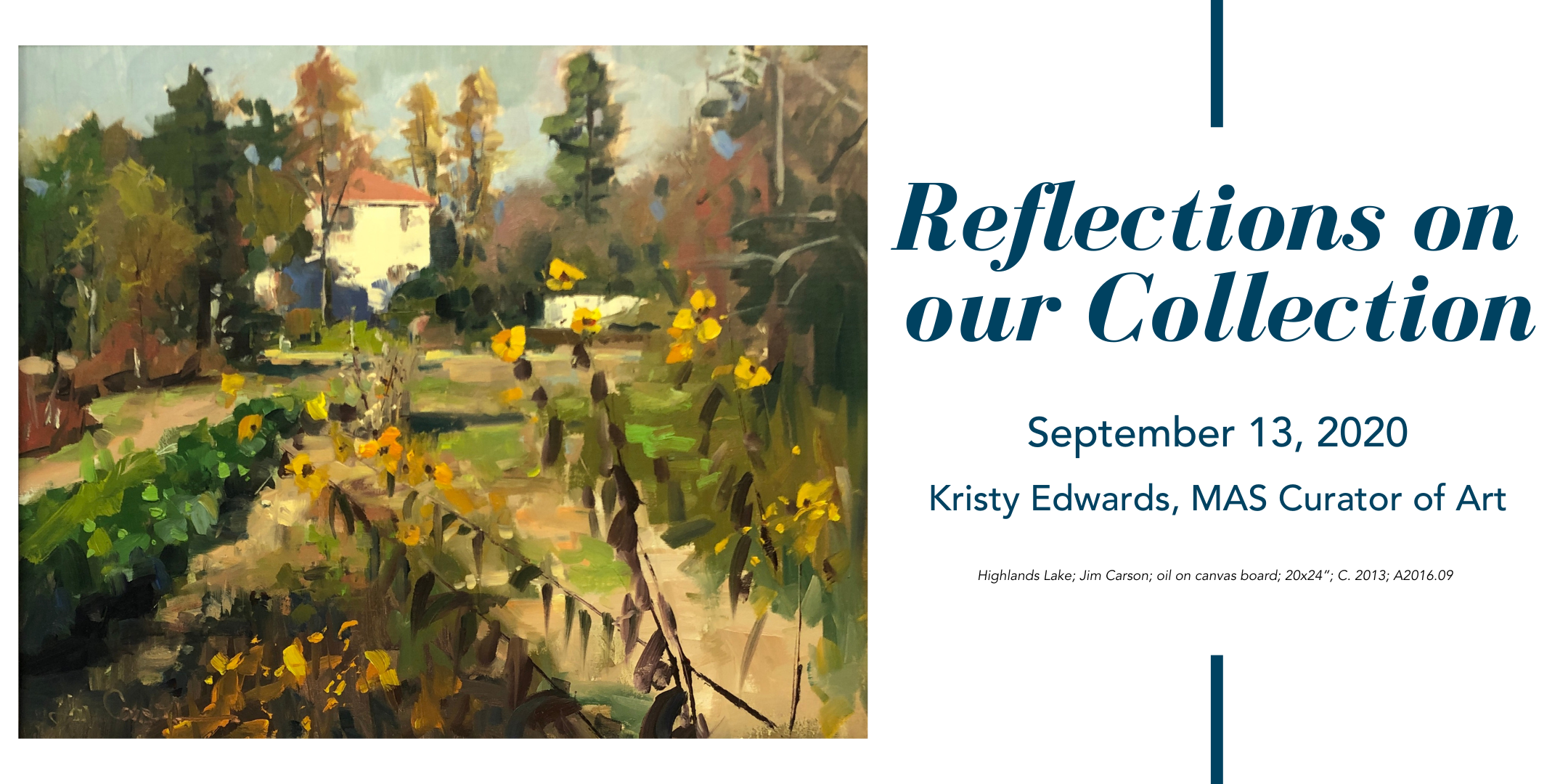 Our piece this week is a painting made by former Maconite, Jim Carson, now of Saluda, North Carolina. It is painted in oil on canvasboard- simply a sheet of primed canvas cloth that has been archivally attached to a rigid substrate, and is 20x24”. Canvasboard is a very well-liked foundation for plein-air artists all over since it holds up ‘in the field’ as they say. The term ‘en plein air’ is French and translates to English as “in fresh air”. It is the genre/method of painters when they pack up their instruments and haul their gear outdoors to set up and capture a landscape or scene right then and there. Atmosphere becomes a subject focus, light- transient and fleeting- becomes a major character. It is most exhilarating and exhausting an endeavor. It’s just this type of paradox that serves as a hook to the unwitting artist. Once you hit the notes of light and shadow, form, atmosphere, depth of field- you can’t ever get enough. There is also the very real benefit of being outdoors in the fresh air, breathing in the light, and being present to the surroundings in a way that we are not ordinarily. It’s quite exhilarating and can be an exceptional experience (take bug spray).

Carson’s work is informed by his many years painting and studying with Marianne Dunn and her many protegés here in Macon. You can see Marianne Dunn’s style here to some extent, but it is his Atlanta mentor, James Richards, Carson told me, who has had the impact we see today. This painting “Highlands Lake” was painted plein air and gifted to us by patron Stephen Reichert in 2016.

Recently I was delighted to talk to him about Highlands Lake on Instagram Live which you can see if you like.

Carson’s work fits well into the “Impressionist” category. I feel that his work, going a bit further with this–fits well into the Russian Impressionist style. This qualification means, to me, that his strokes are laid in a decisive way with little to no fiddling or blending. His strokes are also often impasto; an Italian painting term to describe the thick paint stroke. I might venture to say that it is his clarity of light, the purity of color where light is denoted, that causes me to think of Russian Impressionism. Jim tells us later in our Instagram LIVE chat that indeed his work is informed by his love of Sergei Bongart, Russian American painter whose work can be seen here.

It should be explained that Impressionism is used here as a broad style term. It was a movement in France (and around the world) around the late 1800s or so but is still popular today. When it began, it was a derogatory term placed on a few bold artists who did not get accepted to the Salon show. Upon their being declined, they took it upon themselves to challenge the long-held artistic system and show themselves- together and apart from the Salon- in what was called the Salon des Refusés. The overarching aspect of Impressionism versus “academic” painting was the immediacy of it- the lack of laborious underpainting and glazing. And also the lack of being tied to historical themes. Impressionism was all about being present to the subject-being in the NOW. Paint went down to catch a fleeting ray of sun through a plane tree casting dappled spots into the shadows underneath. Color was placed in pure unmixed spots leaving the viewer’s eye to manage the mixing from a distance. What was disregarded then has now become one of the most beloved and moving styles of art there ever was or is.

Jim’s painting seems as though it could be in France, Belgium, or anywhere in the rural Western world. There’s a sense of longing and homesickness to me in it, as if the structure in the distance is regarded as a place of rest and refuge. Somehow, he has treated that building in such a way that I can project my emotions and sensibilities on it. This is a deft skill, to paint something particular yet leave it open enough for the view to interrelate with it. Another aspect I love is the tall weeds blooming in the foreground, a native plant for sure, this gives it a place of scrappy unkemptness that I love; its as if we are hiking in a bit of chaos and spot the order -the building we are headed for. By including these high weeds/plants, which he told me that he almost excluded, he accomplishes the sense of space - the foreground, middle ground, background illusion which has to be pulled off as if by magic, on a 2d substrate. The illusion is accomplished and his colors are natural and perceptual leaving this painting not just real but including the unseen and felt senses of being there.

We are very pleased to have this painting as a part of our Permanent Collection. Not only does it mark Carson’s work as a Macon citizen, but it is also a link in Macon artist, Marianne Dunn’s connections as well. Thanks for joining me in support of Art.