Posted on August 31, 2016 Posted By: sherryCategories: Past Exhibitions 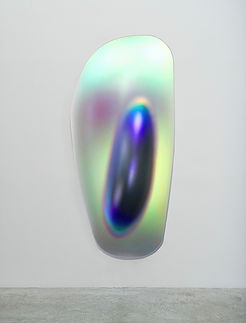 Unifying sculpture and painting, Gisela Colon‘s Glo-Pods are made of blow-molded plastic and have a swelling, asymmetrical geometry that suggests both organic and liquid forms. The sculptures’ inner core of iridescent, reflective pigment creates the experience of colored light emanating from within. On display will be more than 20 luminous, curving, biomorphic forms—autonomous, non-representational objects that provide a perceptual experience of light, color, and space. The viewer encounters a different object each time he or she sees a piece since the interior colors are constantly morphing, depending on lighting conditions and the angle at which they are viewed. 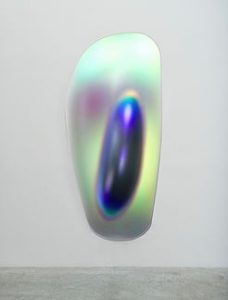 Colon began her artistic career as a painter exhibiting abstract works from 2005 through 2011. In 2012, Colon moved away from painting into sculpture, focusing on perceptual phenomena, an interest she shares with other members of the Los Angeles-based Light and Space movement, such as Robert Irwin, James Turrell, Craig Kauffman, DeWain Valentine, Helen Pashgian, Larry Bell, Ronald Davis, Mary Corse, and Peter Alexander. Colon’s friendship with mentor DeWain Valentine and the writings of Donald Judd and Robert Irwin generated a conceptual shift in her work increasing her interest in issues of visual perception, and materiality, which led to the creation of her plastic sculptures body of work. Through an industrial process, Colon developed a unique fabrication method of blow-molding and layering various acrylic materials, producing mutable objects that appear to emanate light and color from within.