Posted on May 4, 2021 Posted By: Kyrie HugdahlCategories: Reflections On Our Collection 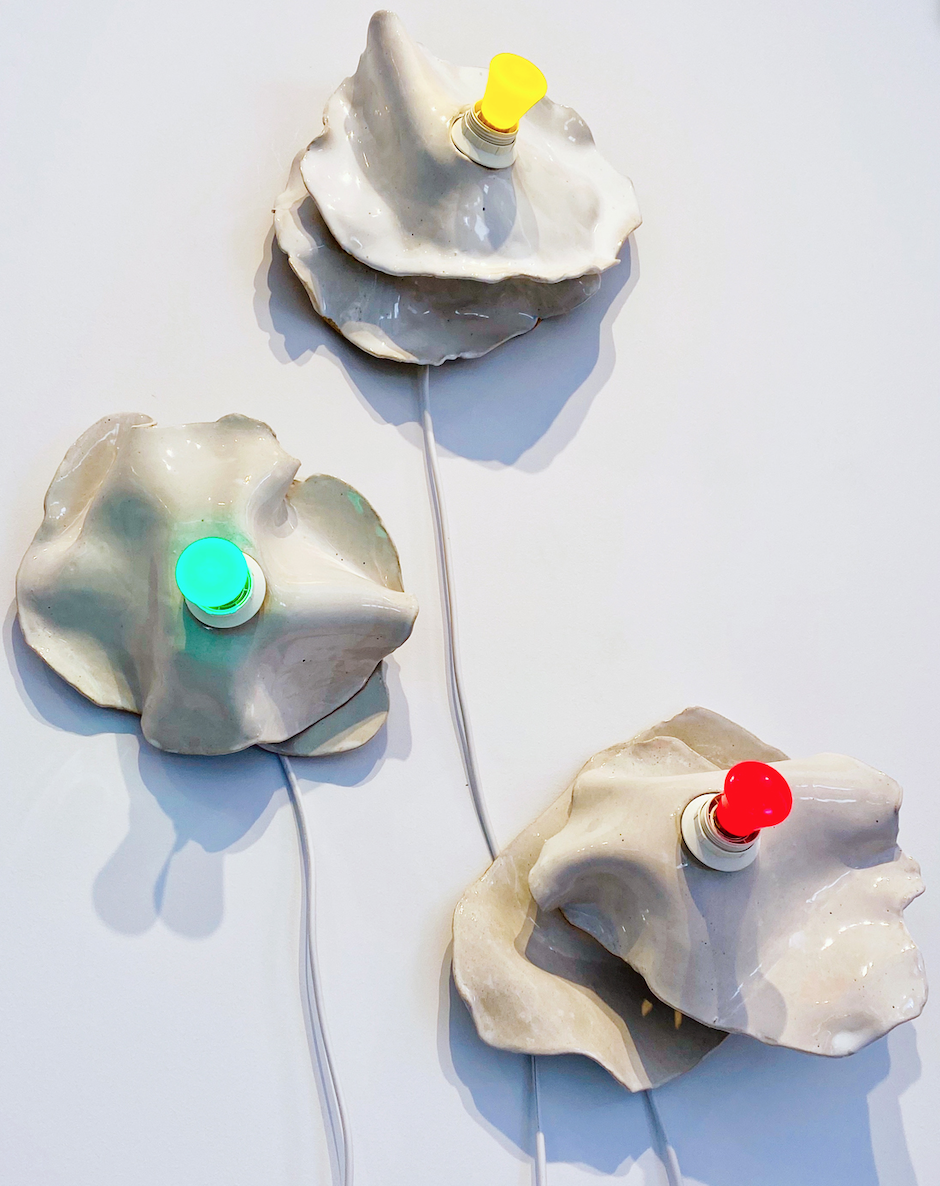 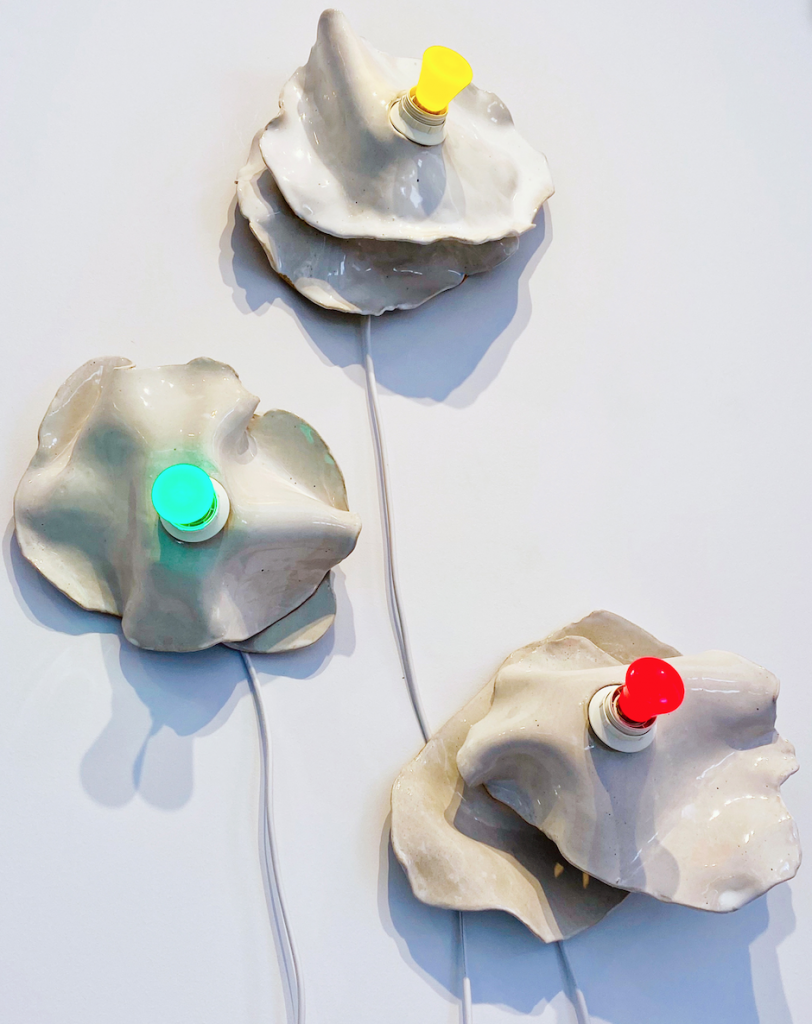 Kristina Larson lives, works, and creates in New Orleans, Louisiana. Her CV and background include interesting departures and turns from the traditional and expected studio artist route. Because of these additions to her career, she ﬁlls out her oeuvre; she has a broader understanding of art, the world, and the art world. Her accomplishments include being a practicing art appraiser- she is an associate member of Appraisers Association of America. By adding this bona ﬁde source of work in the ﬁne art appraisal ﬁeld, she enriches her experience and handling of her craft. It is wonderful how artists ﬁnd areas of interest and expertise to oﬀer the world.

I had the pleasure of joining Kristina for an online Instagram LIVE interview/chat last Monday during her day oﬀ from Octavia Gallery, where she is director. We have 12 of her iconic pieces on display in our ninth annual Emerging National show up until May 26th. MAS Executive Director, in conjunction with our Board of Directors, has added Kristina’s “Wall Flowers” to our permanent collection here at MAS. She builds most of her sculptural ceramics by hand, glazes, and ﬁres them in the same general way that functional pottery is ﬁred, but her results are very unique.

Kristina’s work feels organic at the ﬁrst pass. Her pieces are built upward in a sort of natural growth pattern, much like a plant. Some of them look like coral formations from underneath the sea. Some of them look like lava or molten rock. One piece, which doubles as an end table, has clear resin and green paint. The green seems to glow because it is deep in the resin, which magniﬁes incoming light. Another piece looks like black coral with holes here and there. What’s even more exciting is the intermittent addition of LED rope lights in some of the pieces causing them to have a futuristic vibe. Her work is something new, diﬀerent, and paradoxical even; the lighting is exciting and modern- harkening to neon. There is a hint of paradox by combining the lighting and the natural amorphic shapes that would not occur together unless she had decided to put them together in this exciting way. 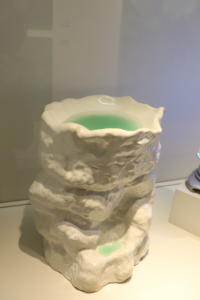 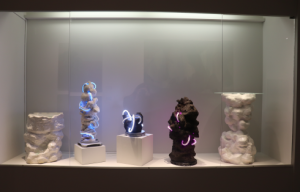 Kristina explained to me that the three sculptures that have rope LED lights are called “Scholar Stones.” Gongshi, as the Chinese refer to them, are the naturally occurring rocks that ancient Chinese scholars admired and kept on their desks and in their meditation space for inspiration and guidance. They could weigh one pound or several hundreds of pounds; most of them were of karstic limestone. There were four characteristics that a scholar stone might embody: openness, thinness, perforations, and/or wrinkling. They were considered beautiful by the Chinese Scholars. Kristina extrapolates this ancient tradition by adding the lighting, making them distinctly beautiful, and her own style. 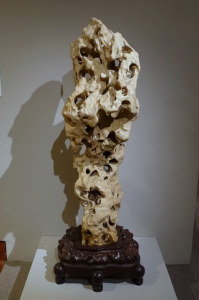 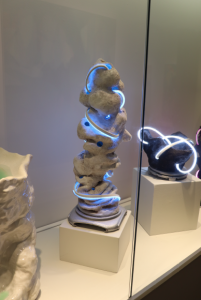 Her other pieces, which do not all have LED lighting, are aesthetically pleasing in their form and arrangement. There are several sculptures that are entirely white with a glossy glaze. Upright and layered, they have a sense of fragility and complexity to them. She often leaves the edges of the form raw and fraying: cracked in the way only clay does. Kristina organizes her forms to bring them up from the base as if resonant of a tree form or a biomorphic pyramid. With the way she builds these sculptures, sometimes wheel-thrown, sometimes hand-built, often a combination of the two, she relies on gravity, chance, and that keen awareness that comes from witnessing shifting things around and seeing “THAT’S IT!!!”

The sophisticated ﬂair of Kristina Larson’s sculpture makes her work especially well-suited for private collections and interior design. A departure from the regular 2D paintings many people collect, her 3D work ﬁlls a gap in many private art collections. Her work is held by Sloan Kettering Cancer Institute and Savannah College of Art and Design in Savannah, where she obtained her Masters in Art Administration.

One of the most exciting pieces we have on display is called Blue Cloud. The lacy white glazed clay creates this ribbon-like form that is soothing on the eye, especially with the blue LED rope lights interred into its interiors following the movement of the form. There is something timeless yet futuristic about this sculpture. It is so easy on the eye that I believe one may never tire of it being in their space. 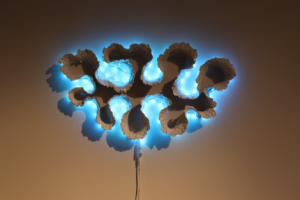 I often write about art, its creators, and their frame of mind and inspiration. I ﬁnd it diﬃcult to do this sometimes and now is such a time. First of all, there is absolutely no substitute for seeing art for yourself in person, so my writing always seems to fall short of that aspect. You should have your own experience with the pieces. I feel sometimes I am an interloper in that intimate process. Such time is now. Kristina’s work, while there is plenty to SAY about it, deserves less talk and more experience. Her works are tactile; they’re ﬂush with light. Her plainer glossy white pieces are calming and mostly about gravity and form. For me to wax on about this or that seems counterintuitive. Kristina’s process as an artist is in real-time, with the real medium of clay. Her hands are the instruments, and her internal witness is her designer.

Because Kristina earned a Masters of Art in Art Administration from SCAD in Savannah, is a practicing member of the American Association of Appraisers, AND works in Octavia Gallery, she knows ﬁrsthand of the important symbiotic relationship between collectors and artists. She is on both ends of that relationship. Kristina knows what resonates with collectors, and she brings that sensibility to her work. She understands that people often want to feel something; something unique and special, something diﬀerent. They want to be moved in some way that they may not even know yet. Kristina knows this and includes that in her process. We see that she takes risks in developing her own POV and adds and subtracts elements, although we sense that no element is oﬀ limits even using automotive paint in the process. Unlike many artists who work solely from their own POV and agenda or story, Kristina includes us in the process of her work, reaching out to us as though it has its own desire to be seen by us.

I feel inept to discuss that which cannot be named in Kristina’s art. I do not want to be irresponsible with describing or interpreting her work in my sincere eﬀort to bring it to you. I don’t want to be overly wordy about something wordless. Her work doesn’t use images either, just material. The best thing I can say is that you must see for yourself.

In closing, I am grateful for her contributions to the art world; grateful she brings sophistication to objects that have a function and can easily ﬁt into our lifestyles whether through jewelry- wearable art- or as furniture. Kristina Larson has a holistic view of art objects, and by bringing her art into your world, you can bring that sensibility of wholeness in with it.

I think it is safe to say that we can expect one thing from Kristina Larson: